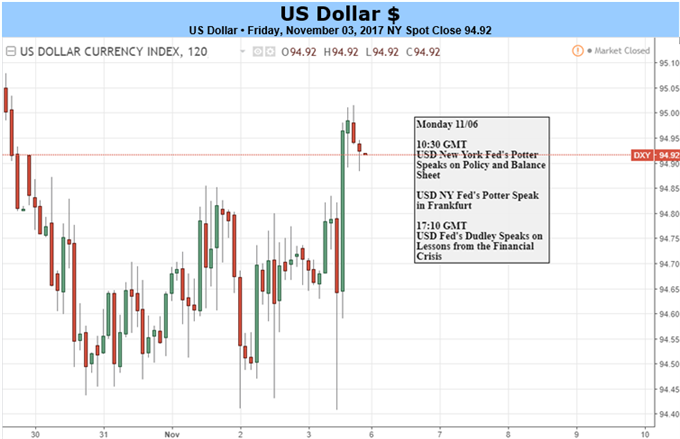 US Dollar: All Eyes on Washington DC Amid Tax Cut Debate

The US Dollar managed to emerge unscathed from a week full of potential pitfalls. The FOMC policy announcement did not degrade the likelihood of a December rate hike, top-tier economic data outcomes continued to look broadly supportive and Donald Trump opted for a seemingly steady pair of hands in nominating Governor Jerome Powell as the next Fed Chair.

The week ahead is short on eye-catching statistical releases, with the University of Michigan consumer confidence report being a sole exception. The Fed-speak docket is a bit more engaging, offering a speech from newly minted Vice Chair for Supervision Randall Quarles. Still, with the central bank’s next move largely priced in, the market-moving potential here might be limited.

The rate hike path in 2018 is likely of greater speculative interest. Fiscal policy is the central unknown on this front. The Trump administration has championed an aggressive round of tax cuts before year-end, which investors expect will be inflationary if it enacted. That would likely force the US central bank into a more aggressive tightening cycle, linking the US Dollar’s fortunes with the legislation.

An initial proposal for the reform introduced by the Republican leadership in the House of Representatives failed to impress last week several GOP lawmakers broke rank to oppose it. Compliance with Senate rules for a simple-majority vote – which would allow Republicans to pass the plan along strict party lines – is also likely to mean significant revisions.

That means the markets will be keen to size up the Senate version of the proposal due out next week. Substantive differences with the House version seem almost inevitable. This may translate into a week of seesaw volatility for the greenback as investors comb through incoming headlines to establish the probability of speedy reconciliation.

If the tax plan seems to be going the way of a multitude of aborted efforts at healthcare reform, the US Dollar may be pressured. The degree of any weakness may be a telltale sign of what to expect through year-end. If the markets are content enough with the Fed’s own cautiously hawkish stance and the currency’s uptrend survives disappointment on the fiscal side, its prospects will meaningfully brighten.