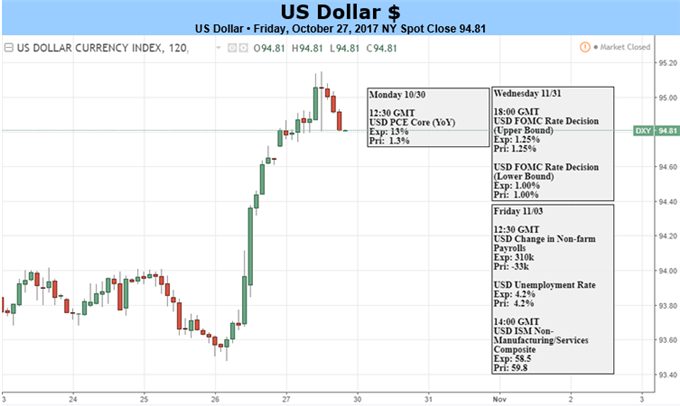 The US Dollar roared higher last week, advancing to a three-month high as already firming Fed rate hike speculation found added fuel in brightening fiscal stimulus hopes. Separate maneuvers in the Senate and the House of Representatives appeared to pave the way for realizing tax cuts that President Trump promised on the campaign trail, with legislators now aiming to get them on the books by year-end.

This kind of momentum has revived “Trump trade” hopes for an expansionary fiscal push that boosts inflation and forces the US central bank into a steeper tightening cycle. Hopes for such an outcome had all-but fizzled after the administration’s multiple failed attempts at healthcare reform, so there turned out to be plenty of room for a market-moving readjustment of expectations as the tax cut push gathered steam.

The week ahead brings a hefty dose of fresh fodder to inform this narrative. The FOMC will convene for a policy meeting and marquee data releases including October’s employment numbers as well as the closely watched ISM and PMI activity surveys are set to cross the wires. Both components seem likely to complement the greenback’s latest upward push.

Recent comments from Fed Chair Yellen have not-so-subtly signaled that the US central bank is on track for a rate hike in December. That makes the release of November’s policy statement a familiar pre-game exercise unambiguously setting the stage for what’s to follow. Meanwhile, a steady outperformance on US data outcomes since mid-June opens the door for another round of upbeat releases on the horizon.

As ever, developments within the White House and on Capitol Hill are wildcards. If progress on tax reform hits a roadblock, the US Dollar rally is likely to hit one too. Furthermore, President Trump is set to announce his pick for Fed Chair by mid-week. That may muddy the waters in a lasting way if he decides not to reappoint Janet Yellen or elevate Governor Jerome Powell, choosing outsider candidate John Taylor instead.