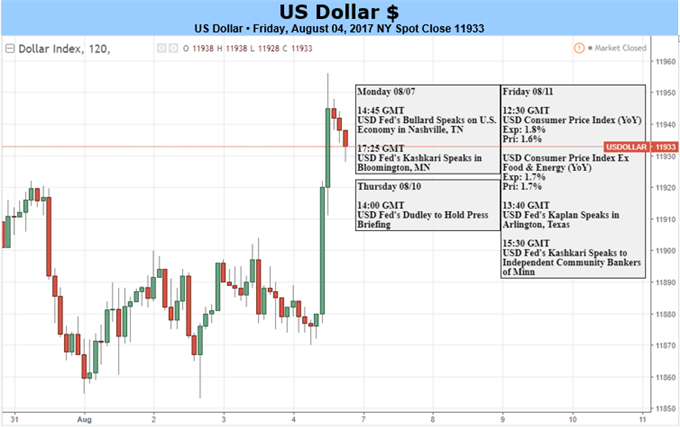 What do retail traders’ buy/sell decisions say about the US Dollar price trend? Find out here.

The US Dollar recovered to snap a three-week losing streak after hitting a 13-month low against its major counterparts. The recovery was fueled by July’s impressive jobs report. Not only did payrolls exceed the markets’ expectations, but wage growth registered firmer as well. That is a hopeful sign for the Fed officials looking for a pickup in inflation to justify another rate hike.

While the priced-in probability of an increase before the end of the year duly rose from after the announcement, it still stands at just 41 percent. This is hardly indicative of strong conviction and leaves ample room for portfolios to rebalance further in the greenback’s favor. Incoming data will determine whether this happens, with the spotlight on CPI figures in the week ahead.

The headline on-year inflation rate is expected to edge up to 1.8 percent, marking the first increase in six months, while the core reading that strips out volatile items like energy and food prices is seen holding unchanged at 1.7 percent. PMI survey data suggest last month saw the fastest pace of US economic activity growth since January however, opening the door for an upside surprise on the latter figure.

Indeed, US economic data outcomes have increasingly improved relative to consensus forecasts since mid-June. This suggests that analysts’ models underestimate the economy’s vigor, which might imply bets on weaker price pressures than are actually at play. If the CPI report confirms as much, investors may be forced to steepen the projected rate hike path, sending the US unit broadly higher.

A healthy offering of scheduled comments from central bank officials will set the stage for whatever happens on the data front. Remarks from St. Louis, Minneapolis, New York and Dallas Fed branch presidents Jim Bullard, Neel Kashkari, Bill Dudley and Robert Kaplan are on tap. The first two policymakers err on the dovish side of the spectrum; the latter two are more indicative of the center.