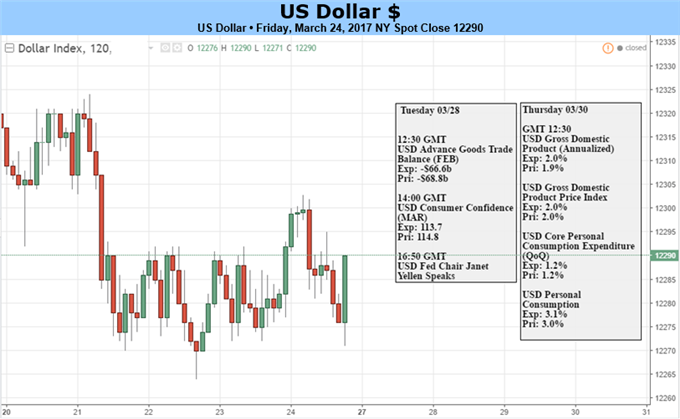 Are retail traders buying or selling the US Dollar, and what does say about the trend? Find out here !

The US Dollar finds itself in a precious position after suffering a second week of losses against its major currency counterparts. The decline played out against the backdrop of eroding Fed rate hike speculation. The priced-in policy path implied in Fed Funds futures has flattened after the FOMC rate decision disappointed the hawks and the Trump administration failed to pass its healthcare reform bill.

Central bank officials delivered a widely anticipated interest rate hike but offered nothing to suggest the pace of tightening would accelerate thereafter. A week later, the White House was forced to abandon the AHCA healthcare reform bill meant to replace so-called “Obamacare”. The ruling Republicans failed to find enough support in their own ranks to pass it through the House of Representatives.

Lingering fiscal uncertainty since December’s FOMC policy meeting probably prompted Chair Yellen and company to hold off on dialing up hawkish rhetoric even as US economic news-flow has continued to improve relative to consensus forecasts. Policymakers repeatedly pointed out that the impact of President Trump’s economic agenda on growth and inflation will greatly influence the monetary policy trajectory.

Last week’s AHCA implosion has cast doubt on the administration’s ability to implement its platform. This strikes at the heart of the “Trump trade” narrative, which envisioned a swift pullback on Fed stimulus against the backdrop of inflationary measures including deregulation, corporate tax cuts and generous infrastructure spending.

At face value, this seems to bode ill for the US Dollar as rate hike expectations moderate. However, this still leaves the Fed as the only G10 central bank intent on scaling back accommodation in 2017. A steady stream of scheduled comments from Fed officials in the week ahead may reinforce this point, capping the greenback’s losses. Whether it is able to mount a substantive recovery is another matter however.

On the data front, the third revision of fourth-quarter GDP figures is expected to show a narrow upgrade while the Fed’s favored PCE inflation gauge is expected to leave core price growth at 1.7 percent in February, unchanged from the prior month. Absent dramatic surprises to the upside, such outcomes are unlikely to generate a strong response from price action.