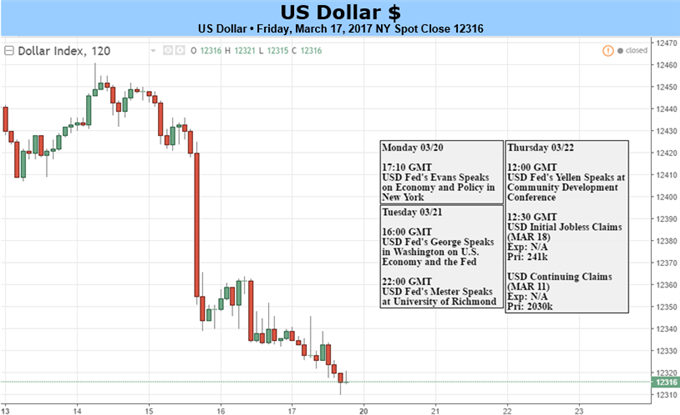 Are retail traders buying or selling the US Dollar, and what does say about the trend? Find out here!

The US Dollar suffered its largest decline in nearly five months last week as the FOMC policy announcement fell short of hawkish investors’ lofty expectations (as suspected). Officials delivered a widely anticipated interest rate hike but offered nothing to suggest steeper tightening thereafter. Projections for key economic indicators and the 2017 path for the baseline lending rate were left unchanged from December’s update.

This matched the markets’ response to the release of official jobs data a week earlier. It too proved strong enough to maintain the baseline outlook but did little to advance the case for faster stimulus withdrawal. A disappointed greenback retreated, presenting a preview of the price action to be produced by the Fed meeting’s outcome three days later.

The week ahead is thin on top-tier data flow, putting the spotlight on a packed docket of scheduled commentary from Fed officials. Comments from Chair Yellen and Neel Kashkari – the President of the central bank’s Minneapolis branch that dissented from the decision to raise rates last week – are likely to take top billing. Besides that, seven other Fed policymakers are due to speak.

As the dust settles after last week’s rate decision, the markets may be reminded that the US central bank is still on track to push rates higher by 25-50 basis points before 2017 draws to a close. That’s 25-50 basis points more than any of the Fed’s G10 counterparts, according to probabilities priced into OIS rates. A steady stream of speeches repeating as much in the coming week may offer the greenback a lifeline.

Fiscal policy remains a wildcard however. Treasury Secretary Mnuchin is making his international debut at a meeting of G20 finance ministers and central bank heads in Germany. A draft communique from the sit-down that surfaced Friday was relatively tame but the heretofore ubiquitous opposition to protectionism was absent. The final message after the meeting ends on Saturday may yet unnerve the markets.