Has the US Dollar Rally Gone Too Far? 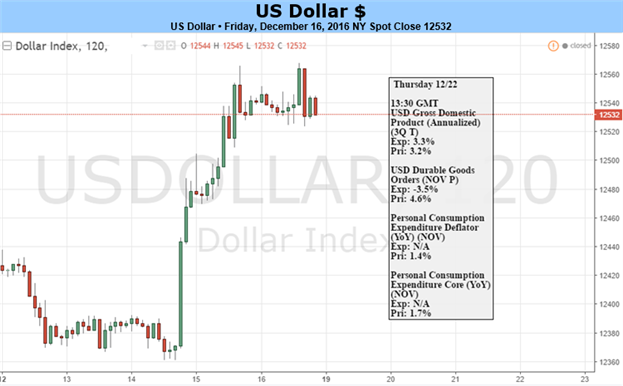 The US Dollar surged to the highest level in 14 years last week, buoyed by an unexpectedly hawkish FOMC monetary policy announcement. Janet Yellen and company upgraded their growth and employment forecasts and projected three rate hikes in 2017, up from two envisioned in September.

Fireworks swiftly ensued. Global bond yields soared at the prospect of higher USD-denominated borrowing costs, the greenback powered upward against the spectrum of major currencies and gold prices sank. Follow-on momentum may prove absent in the week ahead however.

Fed Chair Janet Yellen went out of her way to downplay the hawkish implications of the forecast update in the press conference following the rate decision. She said the FOMC rate path average steepened courtesy of only a few contributing officials and stressed that much still depended on an uncertain fiscal outlook.

This makes sense. Markets have spent much of the past six weeks pricing in the would-be inflationary impact of an expansionary posture championed by President-elect Trump but the precise details of the new administration’s plans are unknown.

A loosely promised wave of spending on infrastructure projects coupled with tax cuts and deregulation can certainly goose up growth in the near term. The economy is already heating up, so such a boost can be reasonably expected to amplify price pressure and beckon a more aggressive monetary tightening cycle.

The other half of Mr Trump’s core economic message – specifically, threatening to tear up free trade agreements, name China a currency manipulator and increase tariffs – may prove decidedly growth-negative. Which side of this equation outweighs the other if both are implemented remains to be seen.

Having had the benefit of the weekend to cool off, investors’ thinking may well evolve in this direction. The emergence of this narrative on the eve of the year-end liquidity drain and with many benchmark assets pushed to meaningful extremes may trigger a round of market-wide profit-taking that sinks the greenback.

Top-tier event risk is largely exhausted for the remainder of the year, so little would stand in the way of corrective price action if it were to be put in motion. Doing so may need no more of a catalyst than the mere proximity of the calendar turn.