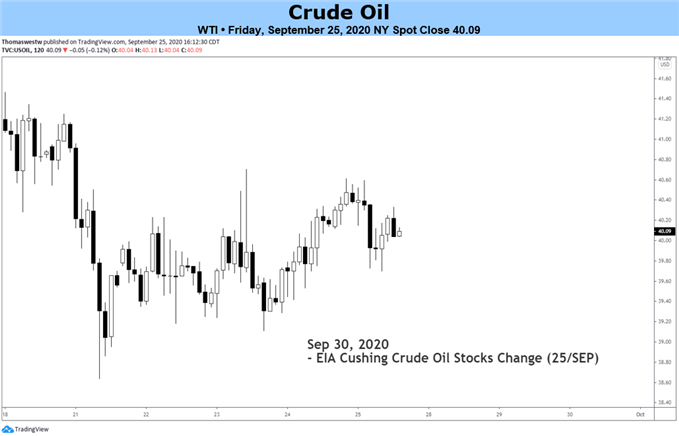 The price of oil trades in a narrow range as the rebound from the September low ($36.13) appears to have stalled ahead of the month high ($43.43), and signs of a protracted recovery may drag on energy prices as the Organization of the Petroleum Exporting Countries (OPEC) appear to be moving to the sidelines following the “the largest and longest production adjustments in the history of the oil sector.”

The price of oil may continue to consolidate over the remainder of the month as OPEC+ unwinds the voluntary production cuts in response to COVID-19, and recent remarks from Secretary GeneralMohammad Sanusi Barkindo suggest the group is in no rush to further reduce supply as the measures taken under the Declaration of Cooperation (DoC) “have reduced volatility and supported the return of much-needed stability in the global oil market.”

OPEC and its allies may strike a similar tone at the next Joint Ministerial Monitoring Committee (JMMC) meeting scheduled for October 19 as officials “welcomed the positive performance in overall conformity for participating OPEC and non-OPEC countries of the DoC, which was recorded at 102% in August 2020,” but signs of a protracted recovery may push the group to scale back on production as “participating countries should be willing to take further necessary measures when needed.”

In fact, OPEC’s most recent Monthly Oil Market Report (MOMR) shows another downward revision in world oil demand forecast, with the projection for 2020 “revised down by 0.4 mb/d, as compared to August MOMR, to a decline of 9.5 mb/d, leading to total demand of 90.2 mb/d.” 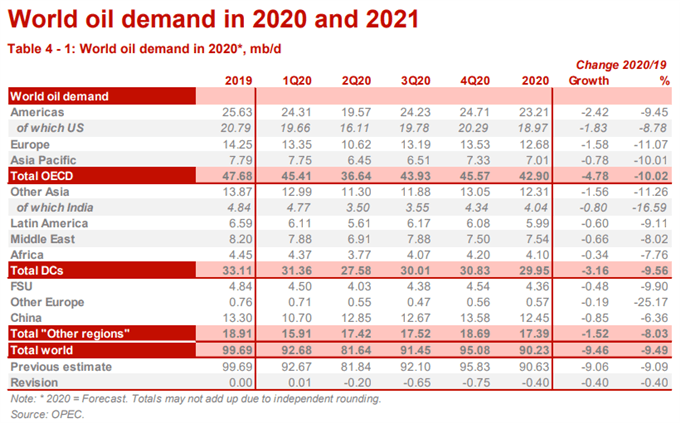 The update also revealed that “for 2021, the world oil demand forecast was also revised lower by around 0.4 mb/d m-o-m.,” with the report going onto say that “in addition to COVID-19-related developments, numerous uncertainties remain, including high debt levels, inflation, ongoing geopolitical risks, trade-related challenges, as well as the possibility of a hard Brexit.”

It remains to be seen if OPEC and its allies will take additional steps in 2020 to support oil prices as US Crude Inventories contract less-than-expected, with stockpiles narrowing 1639K in the week ending September 18 versus forecasts for a 3270K decline.

Nevertheless, fresh figures coming out of the Energy Information Energy (EIA) showed field production of crude narrowing to 10,700K b/d from 10,900K b/d in the week ending September 11, and a further slowdown in US output may keep OPEC and its allies on the sidelines as production in America remains around its lowest level since 2018.

With that said, future updates coming out of the US may sway the price of oil ahead of the next JMMC meeting amid the slowdown in crude production, but signs of a protracted recovery may drag on oil prices as OPEC continues to reduce its global demand forecast.