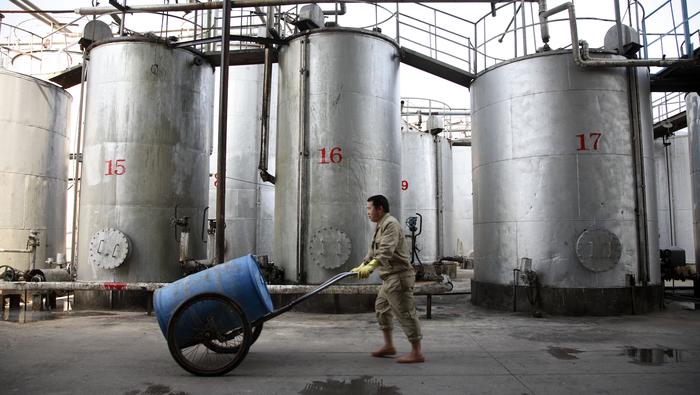 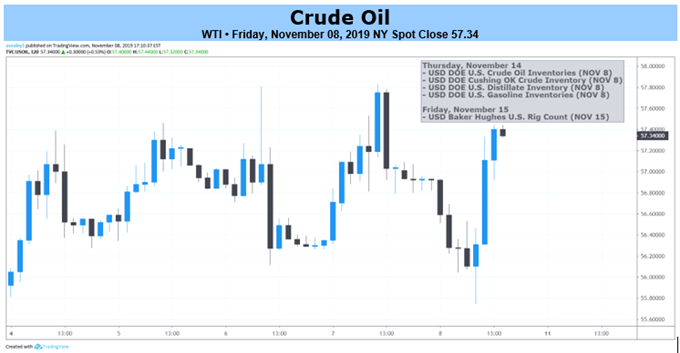 The price of oil pulls back from the weekly high ($57.88) despite signs of a looming US-China trade deal, with the outlook for crude mired by signs of growing supply.

Developments coming out of the US have drag on the price of oil as crude inventories ballooned for the second week, with stockpiles growing 7929K in the week ending November 1 versus forecasts for a 2000K expansion.

At the same time, weekly field production of oil held steady at the record-high of 12,600K during the same period, and the data may become a growing concern for theOrganization of the Petroleum Exporting Countries (OPEC) amid the weakening outlook for demand.

It remains to be seen if OPEC and its allies will make a meaningful announcement at the next meeting starting on December 5 especially as most recent Monthly Oil Market Report (MOMR) warns of lower consumption in 2019.

In turn, OPEC and its allies may implement additional cuts to production to keep oil prices afloat even though the US and China, the two largest consumers of oil, appear to be making progress in reaching a trade agreement.

White House economic adviser Larry Kudlow revealed that “if there’s a phase one trade deal, there aregoing to be tariff agreements and concessions,” and the narrowing threat of a trade war may give oil prices a boost as it instills an improved outlook for energy consumption.

However, a further pickup in US crude inventories along with the expansion in non-OPEC supply may negatively impact energy prices, with the price of oil at risk of giving back the advance from the previous month.

With that said, oil prices remain at risk of a bear market ahead of the next OPEC meeting amid the stickiness in US crude output.

The broader outlook for crude oil remains tilted to the downside as a ‘death-cross’ formation took shape in July, with the Relative Strength Index (RSI) highlighting a similar dynamic as the oscillator snaps the upward trend from June.

Will keep a close eye on the Relative Strength Index (RSI) as it falls back towards trendline support, with a break of the upward trend offering a bearish signal.