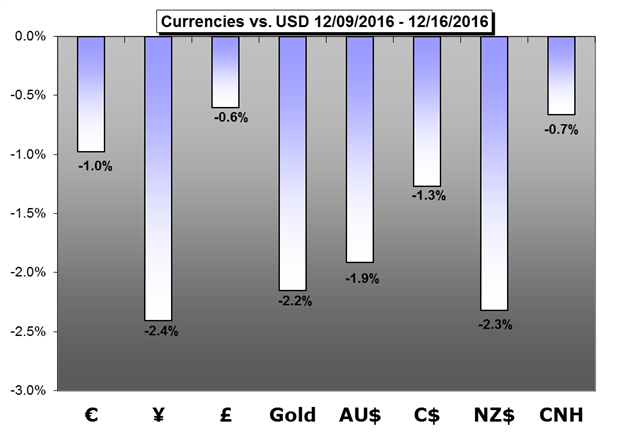 US Dollar Forecast: Has the US Dollar Rally Gone Too Far?

The US Dollar may retreat after surging to a 14-year high last week as traders mull a still-uncertain fiscal outlook at the heart of the narrative driving the currency upward.

The economic calendar for the Euro is thin for the remainder of the week after the German IFO report on Monday. The driving factor for EUR/USD should continue to be US-German yield spreads.

Japanese Yen Forecast: The BoJ’s Pain has Quickly Reversed. But Will They?

The Bank of Japan and the Japanese economy have received a fairly pronounced gift after the election of Donald Trump.

The Australian Dollar can probably look forward to a quieter week in the run-up to the holiday break, and battered bulls would probably welcome it after a tumultuous few sessions. That doesn’t mean the weakened Aussie currency will rise far, however and it may yet slide further.

The Canadian Dollar weakened against the USD as did the rest of G10FX when the Federal Reserve signaled a more hawkish/ steeper dot plot than expected.

The onshore Yuan (CNY) dropped to the weakest level against the U.S. Dollar since June 2008 following Fed’s rate hike decision on Wednesday and continued to refresh the 8-year low point over the next two days.

Gold pricesfell for the 6thconsecutive week with the precious metal down 1.8% to trade at 1137 ahead of the New York close on Friday.

See the DailyFX 4Q forecasts for the Dollar, Euro, Pound, Equities and Gold in the DailyFX Trading Guides page.