Kiwi Shot Down By Dovish Central Bank and US Protectionism 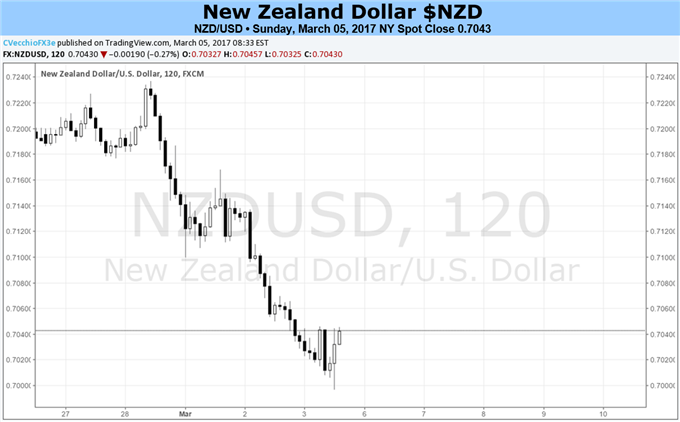 - RBNZ Governor Graeme Wheeler continues to hit home the idea that a weaker Kiwi would be welcomed to offset global uncertainties.

The Kiwi is weakening after a shift in sentiment from the Reserve Bank of New Zealand at its meeting last month when it held the official cash rate steady at record lows of 1.75% and flagged it could remain there for two years or more. Markets had expected rates to stay on hold, but had also been pricing in a shift in tone from Governor Graeme Wheeler and Co and a “when, not if” rate hikes. But NZDUSD slid from 0.72439 to 0.71920 as Wheeler said that the currency ought to be lower than current market pricing. It was this which did the damage, pouring water on rate hike bets.

Later, on March 02, Wheeler expanded on his views in a speech in Auckland, saying risks around future interest rate movements were equally weighted, but warned of uncertainty stemming from US President Donald Trump's protectionism. He said there is some potential upside for output growth if migration and commodity prices are stronger than forecast, but the risks around inflation look balanced. Likewise, the RBNZ Governor said the outlook for global growth has improved over the past six months due to rising commodity prices and stronger business and consumer sentiment, but added that the greatest source of uncertainty relates to President Trump’s ‘America first’ policy platform.

Domestically, he said the greatest source of uncertainty currently lies around the housing market and the possibility that imbalances in the housing market might deteriorate. House price inflation has moderated substantially in recent months, but it’s too early to say whether this moderation will continue, according to Wheeler.

His comments did little to halt the Kiwis swoon. NZDUSD currently trades around 0.7040, near its lowest since November 1 as its further hit by considerable USD strength as US rate rise expectations. AUD/NZD has also hit over a nine-month high, rising from 1.03690 on February 01 to a daily high of 1.07915 on March 03.

Of course, data could always surprise to the upside, which might give the Bank cause to rethink its long-term dovish stance. For instance, New Zealand’s PPI output print for Q4 came in it at 1.5% versus 0.9% last month, though it had limited impact on Kiwi dollar crosses. Next week is short on market-moving numbers, with just building permits (Sunday March 5), dairy auction prices (Monday March 6), manufacturing activity data (Tuesday March 07), Reinz house sales (Thursday March 9), and credit card spending data (Thursday March 9) on the docket.