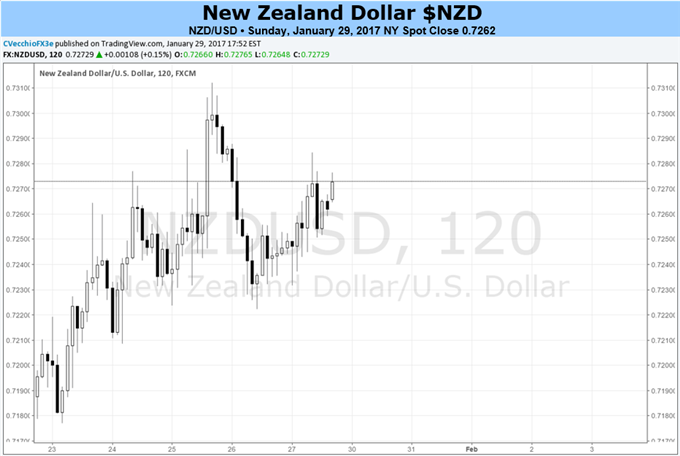 As Global Risks Increase, Markets May See that Kiwis Can Fly

- Incoming economic data is important, but will be in the background given the intense newsflow out of the United States.

- Populist pressures are starting to rise in New Zealand...

The New Zealand Dollar was boosted last week on Wednesday after New Zealand Q4'16 CPI inflation came in stronger than forecast, boosting market expectations of an early rise in interest rates from the Reserve Bank of New Zealand.

Consumer prices rose by 0.4% in the fourth quarter and by 1.3% from a year earlier taking inflation back within the RBNZ’s 1-3% target for the first time in two years. Economists had expected consumer prices to rise 0.3% in the last three months of the year and by 1.2% over the year. Much of the rise was owing to pronounced base effects, stemming from the sharp falls in petrol prices. Importantly, there was clear sign of an upward trend in core inflation, which rose to a three-year high of 1.6%.

The data were therefore strong enough for many analysts to drop their forecasts that that the RBNZ will cut interest rates again this year (the RBNZ cut its main lending rate by 25 basis points to 1.75% at its meeting on November 10) and boost market expectations of an early rise in interest rates. Markets don’t expect the Bank to hike rates at its next meeting on February 9, but are pricing in at least one over the next 12 months.

Meanwhile, some are also worried about the rise of ‘Trump-ism’ in New Zealand, where there is an election this year. Opposition leader Winston Peters from the New Zealand First is nationalist populist in the Trump mould who has played the anti-immigration card in the past. And the controversial American billionaire, Trump donor and venture capitalist Peter Thiel, who calls New Zealand a “utopia” has taken New Zealand citizenship and acquired a lakefront estate in Wanaka. The revelation comes as the New Yorker magazine reports New Zealand has become the destination of choice for rich Americans seeking a sanctuary in case of natural or political disaster.

This begs a curious question - could the Kiwi become the next safe-haven currency du jour? After all, New Zealand recently overtook Singapore as the best place to do business, according to the World Bank. It’s the world’s least corrupt country, according to Transparency International, and the fourth safest behind Iceland, Denmark and Austria, according to the 2016 Global Peace Index.

The correction of the 'Trump trade' since the election is also good news for the Kiwi. As the US’s third-largest export market there were fears for the county’s export returns if the US took a more closed approach to trade. After pulling the US out of the TTP, Trump has since signalled that New Zealand could be offered a bilateral free trade deal with the US.