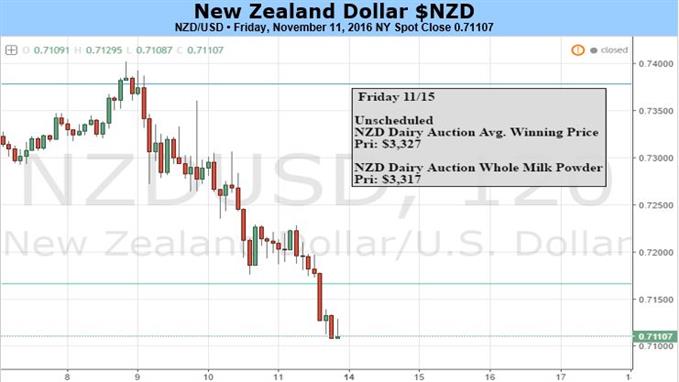 In the Post-Financial Collapse economic environment, Central Banks have taken on a key and critical role in the management of most major economies on Earth. In a paradigm for which Central Banks are, in essence, the only game in town, market participants have come to over-examine each data point or element of innuendo in the effort of discerning the next move from the Central Bank, all in the effort of getting in front of the ‘next big swing.’

We saw such a situation in New Zealand this week as the RBNZ staged a rate cut that pretty much everyone was expecting. As an example of how well this was priced-in, as the cut was announced the Kiwi-Dollar actually went up in price: After a rate cut, which is pretty much the opposite of what is generally expected to happen. This would be really abnormal price action if the same thing hadn’t happened just a couple of months ago; and this merely serves to point out the fact that markets are getting more and more aggressive in trying to position-in in front of Central Bank actions.

At that RBNZ meeting, Governor Graeme Wheeler announced that widely-expected rate cut while also saying that policy would continue to remain as accommodative. What wasn’t expected, however, was the nudge higher to inflation expectations for the next year. Previously the RBNZ was looking for 1.6% inflation and on Wednesday the bank moved that higher to 1.7%. So this was somewhat unexpected and served to bring a mixed-signal to markets that were looking for extreme dovishness from the bank, perhaps so far as looking for another rate cut in the coming months that now might not seem as likely.

The accompanying price action around the announcement was very interesting. As the RBNZ offered their statement to markets, NZD/USD drove higher to a key Fibonacci resistance level at .7337. Over the next hour that move higher reversed, and prices continued to tumble lower for the remainder of the week. But given the fact that much of this drive-lower in NZD/USD was taking place as the US Dollar was strengthening mightily, it could be difficult to ascertain how much of this move lower was being driven by the RBNZ and how much was coming from a stronger Greenback.

The net of this week’s price action was a considerably bearish move on NZD/USD, but the pair is still above longer-term support levels around the psychological level of .7000. From .6950-.7050 is a zone of support that’s held the lows in NZD/USD for now more than five months. Until this zone is violated by falling prices, traders would likely want to implement intermediate and longer-term bullish biases in the pair. Should the zone between .6950-.7050 get taken out, bearish approaches can be investigated but, until then, traders would likely want to be cautious of expecting a break below a level that’s done such a great job of holding the lows since early summer.

Next week the release of Dairy prices on Tuesday could be one of the more compelling drivers on the Kiwi. Milk prices are often a leading driver of NZD price action, and given the brute unpredictability that this data point will often bring, a higher-than-expected read could bring strength back into the Kiwi-Dollar. Outside of Dairy prices, Retail sales are released on Monday afternoon, and consumer confidence and producer price numbers are released on Wednesday afternoon.

However, due to the opposing themes of falling prices throughout this week while longer-term price action remains above pivotal support levels, the forecast for the Kiwi will remain as neutral for next week. – JS