The US Dollar surprised a lot of G10 currencies this week, but few more than the New Zealand Dollar and other commodity currencies. The New Zealand Dollar was lower on the week against the US Dollar by nearly ~2%, but still outperformed the Canadian Dollar, who had disappointing Employment & Trade Balance Data and the Australian Dollar whose Central Bank sent a dovish message alongside their rate cut earlier in the week.

Data in New Zealand came in line with expectations as the Unemployment Rate ticked slightly higher than expectations on increased labor force participants not being able to find jobs and housing pricing data YoY coming in above prior quarterly increases at 12.0% compared to the prior reading of 11.4%. If anything dealt a big blow to the NZD this week, it was likely a fear comprised of souring risk sentiment alongside views that RBNZ Governor Graeme Wheeler may echo the RBA’s views about a strong currency favoring more dovish central bank action. Governor Wheeler will speak on May 10 at Parliament Select Committee on the Financial Stability Report.

The consistent surprises in New Zealand’s economic data alongside increasing doubts of any rate increases from the Federal Reserve in 2016 has lead to an appreciation of ~11% since the January low in NZD/USD. Understandably, a commodity-reliant economy favors a weaker US Dollar, but a stronger currency does make exports less attractive to other nations. Therefore, we’ll need to be on the lookout for Wheeler’s tone about this development to see if the price of NZD/USD is outside of their tolerance level.

In addition to US Dollar weakness, New Zealand’s central commodity, dairy, and specifically whole milk powder remain stable in terms of price, which helps support the dairy industry. On Wednesday, the GDT showed Global Dairy prices rose on increased production from the Northern Hemisphere. Given the stable prices, the largest increase in the labor force since 2004 may limit employers need to pay up for talent and keep wage inflation pressure lower. This week will also present us with BusinessNZ Manufacturing PMI alongside Food Prices MoM. A steady handed Wheeler and positive data on Wednesday could further boost the NZ Dollar above recent highs near 0.7050. 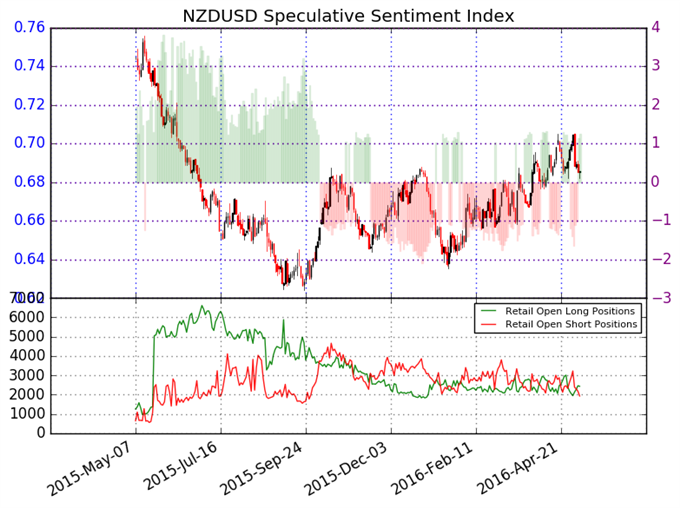 At the end of last week, the ratio of long to short positions in the NZDUSD stands at 1.26 as 56% of traders are long. Yesterday the ratio was 1.04; 51% of open positions were long. Long positions are 2.5% higher than yesterday and 12.9% above levels seen last week. Short positions are 15.6% lower than yesterday and 28.6% below levels seen last week. Open interest is 6.4% lower than yesterday and 11.8% below its monthly average. We use our SSI as a contrarian indicator to price action, and the fact that the majority of traders are long gives signal that the NZDUSD may continue lower. The trading crowd has grown further net-long from yesterday but unchanged since last week. The combination of current sentiment and recent changes gives a further bearish trading bias.