New Zealand Dollar Could be Aided by More Optimistic RBNZ 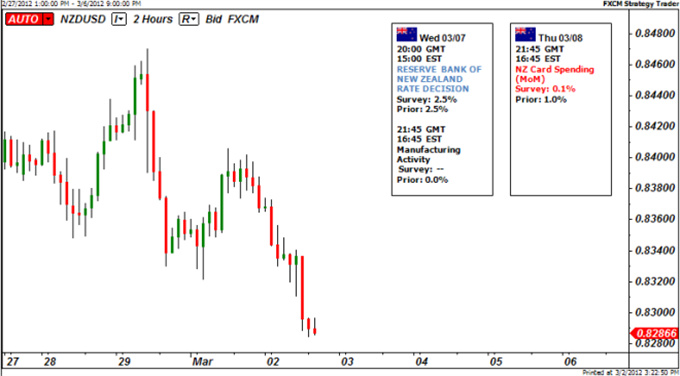 The New Zealand Dollar had its second – yes, only second – losing week of the year, falling by 0.83 percent against the U.S. Dollar. The Kiwi’s performance this year remains impressive as the best performing major, now up 6.68 percent against the world’s currency through the first two months of 2012. Still, against the backdrop of the European Central Bank’s long-term refinancing operation (LTRO), there was an expectation that the commodity-linked currencies would have enough firepower to catapult towards fresh 2012 highs. Instead, moderate instead of dovish commentary out of Federal Reserve Chairman Ben Bernanke on Wednesday proved to be the deciding factor in risk-sentiment in the last few days of February and first two of March.

Data out of New Zealand was supportive of a continued push higher by the Kiwi, which has broader implications that will be discussed shortly. Although the trade balance figure for January was negative, exports continued to rise while the Kiwi’s recent strength undoubtedly contributed to the even greater rise in exports. Building permits and business confidence soared past their expectations, while commodity prices remained stable in February in the facing of rising price pressures.

In all, the stability of the New Zealand economy and recent data paint an optimistic picture for the New Zealand Dollar in the days ahead, and this will be reflected at the Reserve Bank of New Zealand’s policy meeting on Thursday (late during the U.S. trading session on Wednesday). The RBNZ has kept rates on hold at 2.50 percent since March 2011, a month after a devastating earthquake in Christchurch that temporarily setback the fast-growing economy. The central bank was forced to keep rates low throughout 2011, as uncertainty over Chinese growth, the Euro-zone sovereign debt issues, and the United States’ sovereign rating weighed on global growth prospects.

Now that volatility across markets has calmed and global growth prospects have turned up – including those in New Zealand – the RBNZ is likely to take a moderate stance, slightly leaning towards a rate hike if anything. While the Credit Suisse Overnight Index Swaps point towards a 2.0 percent chance of a rate cut, there are still an additional 24.0-basis points being priced into the New Zealand Dollar over the next 12-months. I expect policymakers to note the potential for tail-risk out of Europe, but with the ECB’s massive liquidity injections, there is a smaller likelihood of a ‘Lehman Moment’ in the markets that would cause a flight to safety and away from the Kiwi. This coming week, I’m cautiously optimistic, and should the RBNZ take a more hawkish tone, the NZDUSD should have the fundamental impetus to test its 2012 highs. – CV