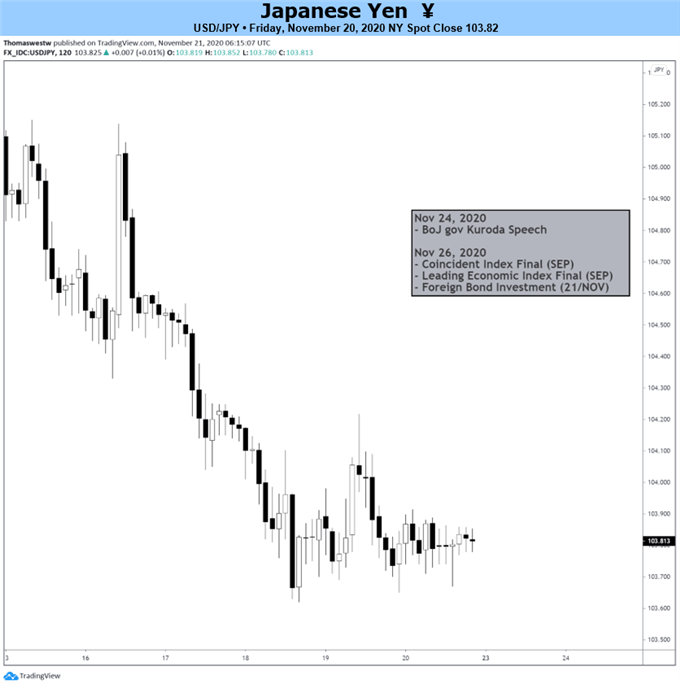 The Japanese Yen spent most of this past week trading higher against its major counterparts, including the US Dollar. USD/JPY aimed lower as Treasury yields weakened, making government bonds in Japan relatively more attractive to investors. In fact, following some divergence ahead of the US presidential election, USD/JPY now seems to be tracking bond yield spreads between the US and Japan again – see chart below.

The US yield curve flattened as longer-dated government bond returns declined, signaling fading confidence in the medium-term outlook. Investors appear to be focusing on the record pace in local Covid-19 case growth rather than on positive vaccine news. As the nation reached hospitalization highs, California imposed a late curfew for about 94% of its residents. Texas saw 12,293 cases, beating a previous record from the summer.

Going forward, the anti-risk Japanese Yen appears to be in an optimal position. A lack of expediency in fiscal support from the US poses a threat for both local and external equities. This is underscored if more states take measures to impose lockdowns to help contain the spread of the disease. The International Monetary Fund (IMF) warned last week that the global recovery appears to be losing momentum.

Meanwhile in Japan, cases were also setting records. This caused Tokyo to raise its Covid-19 alert status to its highest level. While policymakers refrained from imposing lockdowns, they urged citizens to be more cautious. The Nikkei 225, Japan’s benchmark stock index, halted its impressive winning streak from earlier this month after closing at its highest since 1991.

For updates on developments in the Japanese Yen and risk trends, make sure to follow me on Twitter @ddubrovskyFX

Finance Minister Taro Aso mentioned that they ‘must stimulate sentiment with fiscal policy’. His tone echoes what the Federal Reserve has been stressing in the US. FOMC minutes may continue to reiterate this message with consumer sentiment also on tap. The latter could disappoint given rising coronavirus cases. It will also be a shortened trading week due to the Thanksgiving holiday, opening the door to lower levels of liquidity.