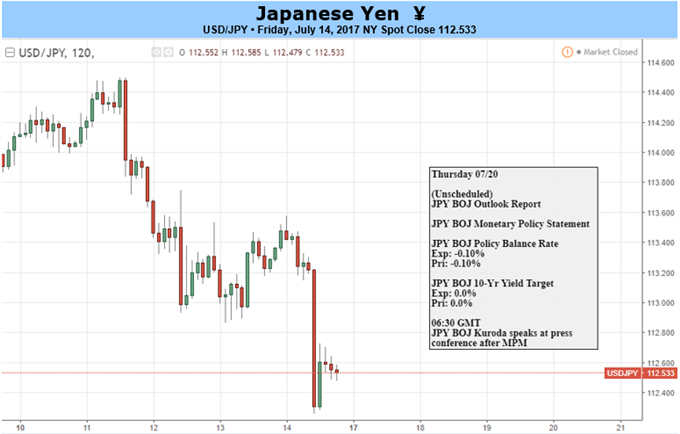 What do retail traders’ buy sell decisions say about the Yen price trend? Find out here.

The Yen finds itself at something of a crossroads as the Bank of Japan mulls competing economic trends ahead of next week’s monetary policy announcement. On one hand, policymakers’ steadfast commitment to an ultra-dovish posture even as growth gathers steam seems to have finally created the backdrop for reflation. On the other, the central bank’s tactics may be starting to look self-defeating.

Japanese economic activity trends seemed to turn a corner in the fourth quarter of 2016, with the rate of expansion across the nonfarm sector (manufacturing and services) steadily accelerating thereafter. Not surprisingly, local stocks have risen in tandem, seemingly reflecting better earnings prospects.

The BOJ’s refusal to entertain tightening even against this backdrop has kept the currency firmly locked in as a funding currency, meaning optimistic investors are happy to borrow cheaply in Yen terms to buy higher-returning assets. That has meant depreciation, which has in turn helped boost inflation. Indeed, growth pickup over the past 9 months has been accompanied by a rise in the BOJ’s target core CPI gauge.

However, the markets have their own tightening mechanisms at play. The risk-on mood has translated into capital flows out of the safety of government bonds (JGBs), pushing yields higher alongside share prices. In an apparent bid to prevent this increase in borrowing costs from snuffing out reflation, the BOJ committed to capping the rate on the benchmark 10-year JGB near 0 percent.

The markets are now testing the central bank’s resolve. On July 7, it was forced to intervene with its first large fixed-rate bond purchase offering in five months as the 10-year rate hit the highest level since February. If policymakers are to sustain the nascent reflationary trend, they will need to convince markets of their wherewithal to contain borrowing costs as faster growth and a weaker Yen do their work.

A small step in this direction may be to downgrade inflation expectations even as the GDP growth forecast is nudged higher. The BOJ has tiptoed in this direction since the beginning of the year however and the latest need for intervention suggests the approach is insufficiently potent. The appearance of a global tightening push, with the likes of the BOE and ECB seemingly near a turning point, may further undercut it.

On balance, this means the BOJ may need to resort to heavier artillery. Recently disappointing economic news-flow may have defused the need an immediate shake-up of the policy mix, deflating the risk-on swell a bit dialing back upward pressure on bond yields. Signaling the clear prospect of stimulus expansion seems necessary however. In fact, a status-quo announcement may well result in unhelpful Yen gains.