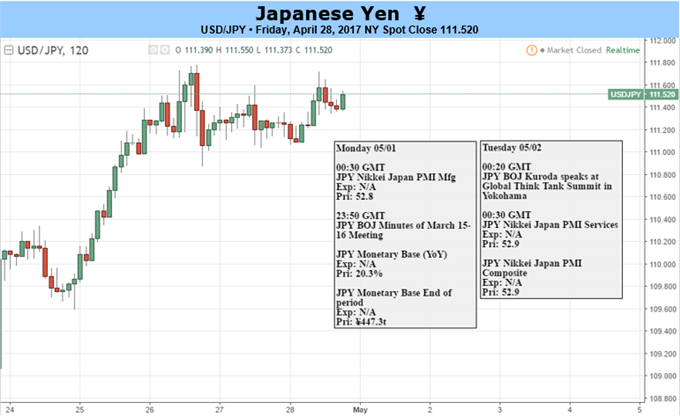 As predicted here a week ago, the Japanese Yen declined last week and there’s little sign yet that the trend is about to change.

According to the Bank of Japan, the outlook for the economy is improving and inflation is picking up, but there was no indication of that in the latest hard data, which were disappointing. Japan’s core consumer prices rose 0.2% in March from a year earlier, compared with economists’ median estimate of a 0.3% annual gain. Excluding fresh food and energy, consumer prices fell 0.1% in March from a year earlier.

Meanwhile, industrial output contracted in March after just one month of growth as production of machinery and electronics declined, and household spending contracted by 1.3% year/year in March – better than February’s fall of 3.8% but a disappointment compared with expectations of a drop of just 0.3% and the 13th straight month of lower spending.

So, as the Bank of Japan said, the risks are still skewed to the downside, and that means no likelihood of its quantitative and qualitative easing (QQE) measures being reduced as far as the eye can see. Indeed, its loose monetary policy stance is now more justified than ever given the weak inflation data, so the BoJ will continue to be in no hurry to tighten policy and that will mean a continuing lack of support for the Yen and a likely strengthening further of USD/JPY.

Moreover, as I reported last week, the Japanese Yen is in danger of losing its “haven” status due to its proximity to the troubled Korean peninsula. So even if traders decide to lessen their exposure to risky assets for whatever reason, they are now more likely to opt for the Swiss Franc and gold. That is a toxic mixture for the Yen and suggests the upward trend in USD/JPY is set to continue.