Japanese Yen: No End In Sight For Accommodative Monetary Policy 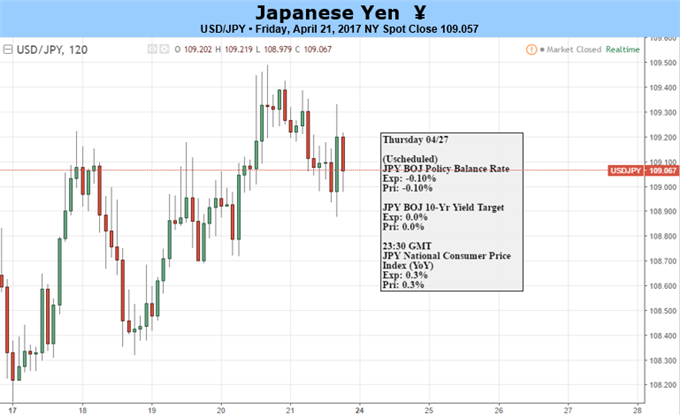 Speaking in Washington Friday, Bank of Japan Governor Haruhiko Kuroda had a simple message: the current pace of quantitative and qualitative easing, or QQE, is set to continue indefinitely and there’s no chance of Japan’s monetary stimulus program being cut back any time soon.

“The BoJ will continue its ultra-easy monetary policy to achieve its 2% inflation target at the earliest date possible,” he said.

Kuroda’s comments came against a background of solid economic expansion thanks to a pick-up in global demand for Japan’s exports. The flash Markit/Nikkei Japan manufacturing purchasing managers index (PMI) rose to 52.8 in April on a seasonally-adjusted basis, up from a final 52.4 in March – above the 50 level that separates expansion from contraction for the eighth consecutive month. The flash index for new export orders rose to 53.9 from a final 51.9 the previous month. The output component of the PMI was a preliminary 53.6, up from 53.0.

“April's PMI data signaled continued healthy growth of Japan’s manufacturing sector, and the latest results were again consistent with production rising at a quarterly rate of around 2%,” said Paul Smith, senior economist at IHS Markit, which compiles the survey.

However, that economic growth has yet to lift inflation. Figures to be released this coming week are expected to show that core consumer prices increased by just 0.3% year/year in March, up just a tad from the previous 0.2%. To put that in context, a core inflation rate of 0.3% would be the highest for nearly two years. Moreover, core inflation data for Tokyo in April – released a month earlier than the nationwide figures – are expected to show a 0.2% decline.

It’s therefore all-but certain that the Bank of Japan’s monetary policy meeting on April 26/27 will end with all its monetary settings unchanged; potentially a negative factor for the Japanese Yen. After falling steadily this year, USD/JPY has shown signs of stabilizing and even rising modestly over the past few days and that weaker trend for the Yen – partly in response to Kuroda’s comments – could well continue.

Tiny long positions with close stops could therefore be profitable, with a break above near-term resistance at 109.40/50, and then the 200-day moving average at 110, needed to confirm a new upward trend in USD/JPY. On the downside, a stop at 108 would limit losses if the downtrend resumes.