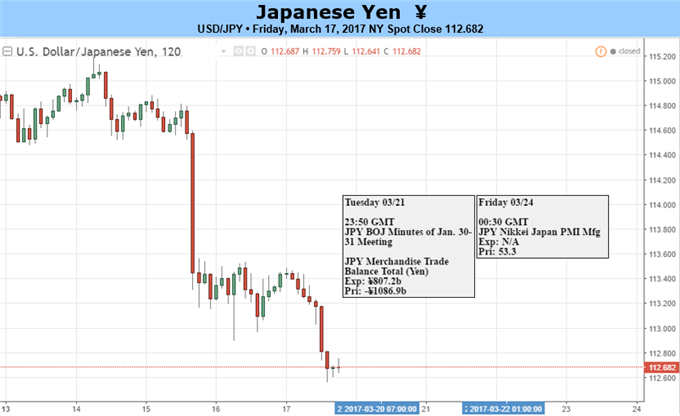 The Federal Open Market Committee’s (FOMC) March rate-hike failed to prop up the USD/JPY exchange rate, and the pair appears to be working its way back towards the 2017-low (111.59) as the central bank tames interest-rate expectations. 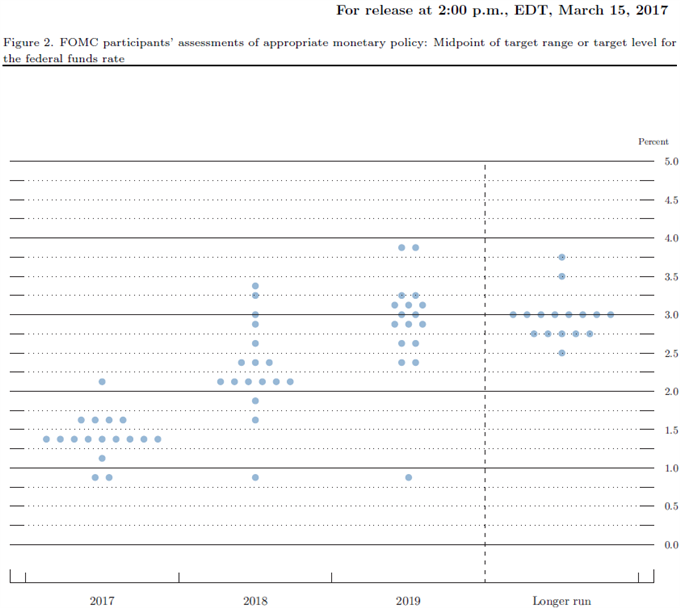 Based on the updated projections, the FOMC appears to be on course to deliver three to four rate-hikes in 2017, but the reaction to the interest rate decision suggests market participants were largely disappointed as officials continue to forecast a terminal fed funds rate close to 3.00%. In turn, Fed Fund Futures are currently pricing a greater than 90% probability the committee will preserve the current policy at the next meeting in May, and the bullish sentiment surrounding the greenback may continue to unravel as the central bank persistently warns ‘market-based measures of inflation compensation remain low; survey-based measures of longer-term inflation expectations are little changed, on balance.’

Moreover, Chair Yellen argued that the pickup in headline inflation was ‘largely driven by energy prices,’ and it seems as though the central bank may allow price growth to overshoot the 2% target for some time as the central bank pledges to ‘carefully monitor actual and expected inflation developments relative to its symmetric inflation goal.’ With that said, market participants may pay increased attention to the key speeches on tap for the week ahead as a slew of 2017 voting-members on the wires (Chicago Fed President Charles Evans, New York Fed President William Dudley, Chair Janet Yellen, Minneapolis Fed President Neel Kashkari and Dallas Fed President Robert Kaplan), but the fresh batch of central bank rhetoric may do little to heighten the appeal of the greenback especially as the committee appears to be in no rush to remove the highly accommodative policy stance.

Nevertheless, the Bank of Japan’s (BoJ) Quantitative/Qualitative Easing (QQE) Program with Yield-Curve Control may continue to instill a long-term bullish outlook for USD/JPY as the central bank retains a dovish tone and pledges to keep the 10-Year yield close to zero. Indeed, Governor Haruhiko Kuroda warned the benchmark interest rate can be reduced further as the committee struggles to achieve the 2% inflation target, and it seems as though the BoJ will continue to expand its balance sheet for the foreseeable future as officials note ‘the year-on-year rate of change in the CPI is likely to increase from about 0 percent and become slightly positive, reflecting developments inenergy prices.’ The comments suggest the BoJ will also look through the recent pickup in price growth due to the transitory nature, and the bar seems high for the BoJ to move away from its wait-and-see approach as officials continue to monitor the impact of the non-standard measures. As a result, the broader outlook for the Japanese Yen remains bearish as the BoJ sticks with the slew of non-standard measures, but the dollar-yen exchange rate may continue to track the broad range from earlier this year as market participants gauge the future pace of the Fed’s normalization cycle. 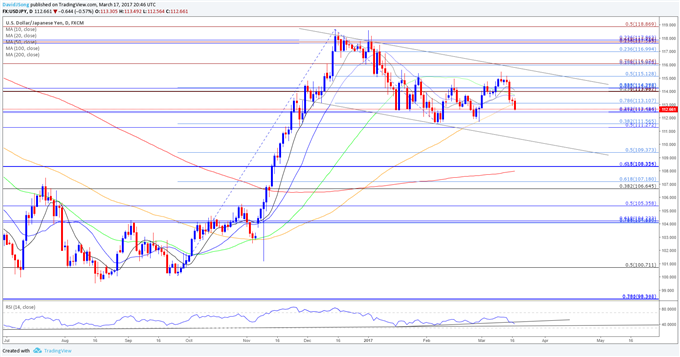 The near-term outlook for USD/JPY is tilted to the downside following the string of failed attempts to close above the 115.10 (50% retracement) hurdle, with the pair at risk of working its way back towards the February low (111.59) as it starts to carve a series of lower highs & lows. Nevertheless, Japan’s fiscal year-end may give way to range-bound prices, and the dollar-yen exchange rate may continue to consolidate within the range from earlier this year as the Fibonacci overlap around 111.30 (50% retracement) to 111.60 (38.2% retracement) offers support. - DS