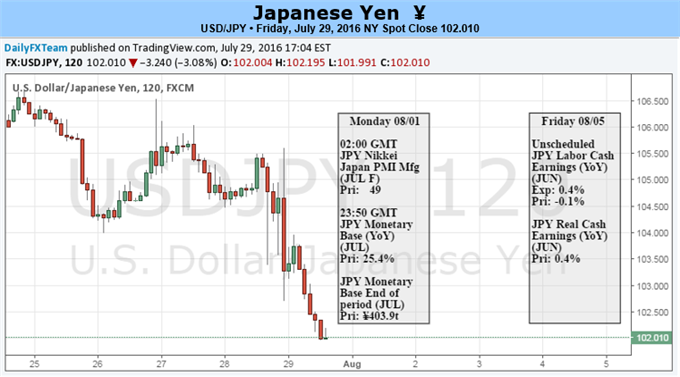 USD/JPY Downside Targets in Focus Ahead of U.S. Non-Farm Payrolls

USD/JPY may continue to give back the rebound from the June low (98.78) amid waning expectations for a 2016 Fed rate-hike, while the Bank of Japan (BoJ) continues to endorse a wait-and-see approach for monetary policy.

With the U.S. economy expanding an annualized 1.2% in the second-quarter of 2016, the weaker-than-expected rate of growth accompanied by the downtick in the core Personal Consumption Expenditure (PCE), the Fed’s preferred gauge for inflation, may encourage the Federal Open Market Committee (FOMC) to further delay its normalization cycle as the central bank warns ‘market-based measures of inflation compensation remain low; most survey-based measures of longer-term inflation expectations are little changed, on balance, in recent months.’ With that said, the greenback stands at risk of facing additional headwinds over the coming months as market participants continue to push out bets for the next Fed rate-hike, but the Non-Farm Payrolls (NFP) report on tap for the week ahead may boost interest-rate expectations as the U.S. economy is anticipated to add another 180K jobs in July, while the Unemployment Rate is projected to narrow to an annualized 4.8% from 4.9% in June. Indeed, a further improvement in labor market dynamics may put increased pressure on the FOMC to implement higher borrowing-costs, and fresh comments from San Francisco Fed President John Williams, Dallas Fed President Robert Kaplan and New York Fed President William Dudley may prop up the greenback should central bank officials show a greater willingness to raise the benchmark interest rate in 2016.

However, USD/JPY may track lower ahead of the key U.S. event risks as the BoJ’s sticks with the status quo and plans to compile a ‘comprehensive assessment’ for the next interest-rate decision on September 21. Even though the BoJ keeps the door open to further embark on its easing cycle, central bank officials appear to be in no rush to implement more non-standard measures as they continue to assess the impact of the negative-interest rate policy (NIRP), and Governor Haruhiko Kuroda may make additional attempts to buy more time especially as Prime Minister Shinzo Abe pledges to unveil a ‘bold’ fiscal stimulus package to assist the ailing economy. With that said, easing bets for a 2016 Fed rate-hike paired with more of the same from the BoJ may drive USD/JPY lower over the near to medium-term especially as Japan returns its historical role as a net-lender to the global economy. 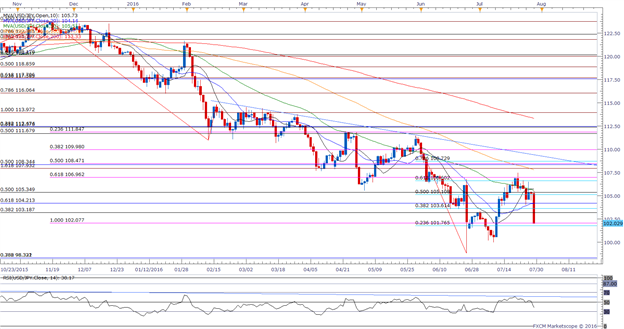 The broader outlook for USD/JPY remains tiled to the downside as it largely preserves the downward trend from earlier this year, and the pair stands at risk of giving back the rebound from the June low (98.78) as it appears to have carved a lower-high in July. In turn, a break/close below the Fibonacci overlap around 101.80 (23.6% retracement) to 102.10 (100% expansion) may open up the next downside region of interest coming in around 98.30 (38.2% & 78.6% retracements).