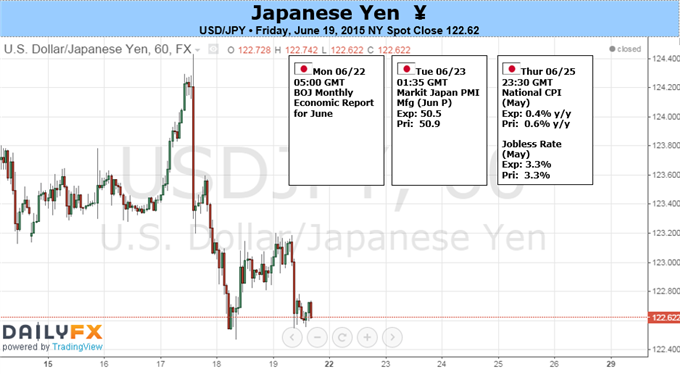 Japanese Yen Unlikely to Break Out Until Greece Moves

Japanese Yen Unlikely to Break Out Until Greece Moves

The Japanese Yen finished the week modestly higher versus the recently-downtrodden US Dollar, but the lack of a clear breakthrough from a highly-anticipated US Federal Reserve meeting and a lackluster Bank of Japan decision give few clues on next steps for the USD/JPY.

All eyes were on the US Federal Open Market Committee (FOMC) as investors looked to Fed guidance on its next interest rate moves, and relatively dovish official rhetoric and forecasts sparked a modest US Dollar sell-off across the board. Officials stopped short of giving clear indication on whether the FOMC would raise interest rates at its much-anticipated September meeting, however; the ambiguity gives relatively little reason to expect the US Dollar will continue sharply lower through the foreseeable future.

A mostly uneventful policy meeting from the Bank of Japan likewise gives little reason to believe that the USD/JPY will see major moves through the foreseeable future. The BoJ did announce it would improve the way in which it communicates policy decisions and economic forecasts in the future. At this stage there is little reason to believe the changes will have a meaningful impact on the Japanese Yen through the near-term.

A noteworthy drop in FX volatility prices suggests that the USD/JPY may continue to trade within its recent ¥122.50-124.50 range. The most important caveat is that a continued lack of progress in ongoing negotiations between Greece and its creditors raises the risks of significant market volatility. If Greece is unable to seek funding ahead of a key June 30 deadline it may in effect be forced out of the Euro Zone—an event that would likely send significant shockwaves through broader financial markets.

In times of market turmoil we have most often seen the Japanese Yen outperform its major counterparts, and we believe that similar episodes in the future would push the JPY higher across the board (USDJPY lower). Barring such an outcome, however, we see little reason to believe that the US Dollar will break substantially in either direction versus the recently slow-moving Japanese Yen. - DR