US Dollar Likely to Reverse versus Japanese Yen in Week Ahead 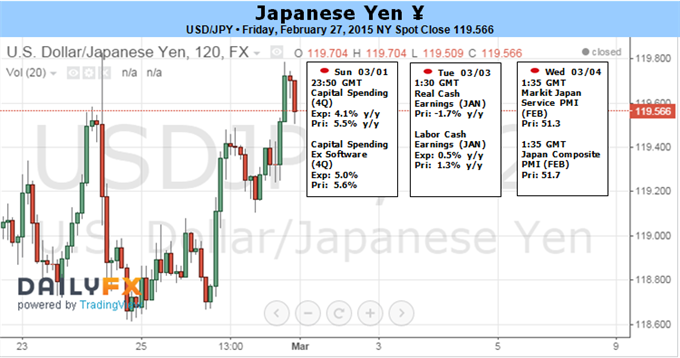 The Japanese Yen traded lower versus the US Dollar for the third week in four and left the USDJPY exchange rate near the key ¥120 level. Why might the week ahead finally bring a major breakout?

Traders have shown little interest in pushing the Yen beyond its narrow three-month trading range, but any significant surprises in upcoming US Personal Income/Spending and Nonfarm Payrolls labor data could change outlook for the otherwise-rangebound USD/JPY exchange rate. A fairly consistent rally from January lows near ¥116 suggests that the next major USDJPY move will be to the topside. Relatively low trader volumes in recent weeks nonetheless limits our enthusiasm for fresh USDJPY-long positions, however. We would ideally see a major shift in market conditions and trader attitudes to justify calling for a sustained break higher.

The key question remains unchanged: when will the US Federal Reserve begin raising interest rates? Yield-seeking investors have typically sold the Japanese Yen against higher-yielding currencies through normal rate environments. And indeed, the fact that the US Fed appears to be the only major central bank to act in 2015 has helped push the US Dollar to 8-year peaks versus the JPY.

Expectations can only take the Greenback so far, and eventually investors will need to see action. Consistent improvements in US Nonfarm Payrolls figures suggest the coming week’s result will further build the case for Fed rate hikes. Yet fundamental risks seem weighed to the downside as few predict that hiring matched the impressive pace seen through January’s report.

It’s certainly possible that strong US economic data could force a larger break higher in the USDJPY. As far as probabilities go, however, we put relatively low odds on a sustained US Dollar move higher in the week ahead.