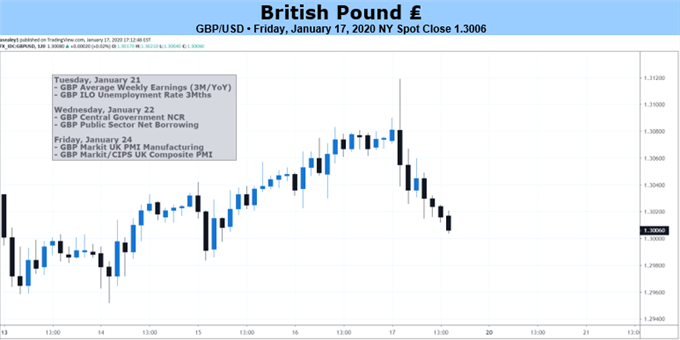 The British Pound appears to be refocusing on monetary policy as no-deal Brexit fears fade into the background following the Conservative party’s commanding victory in last month’s general election. That makes the passing of Prime Minister Boris Johnson’s Brexit withdrawal bill all but certain.

Indeed, an expedited procedure is expected to have it back from the House of Lords this week. MPs in the Commons will then begin vote on any amendments made. Barring any unexpected hiccups, the UK should thus be on track to formally exit the EU by month’s end, as scheduled.

This changes little in practice. A transition period seamlessly begins at withdrawal, starting the process of negotiating an EU-UK trade deal. This is then likely to make for a broadly tense backdrop through 2020 amid worries that Mr Johnson’s hard year-end deadline is too ambitious.

Meanwhile, a dovish tilt in guidance from the Bank of England is a more pressing concern. Sterling has dropped alongside Gilt yields as the policy outlook implied in rate futures swung out of neutral territory. Traders now expect at least one 25 basis point cut over the course of the year.

The stimulus boost is expected to arrive quickly, with the probability of downshift in the target Bank Rate at the late-January meeting of the steering MPC committee pinned at a commanding 71 percent. There is yet room for greater conviction however, putting a spotlight on incoming macroeconomic news-flow.

The IMF will update its global economic forecasts, setting the stage for the annual gathering of bigwigs at the World Economic Forum in Davos. BOE Governor Mark Carney is among the speakers. PMI data is due to show the economy returned to sluggish growth in January having shrunk in the fourth quarter.

UK economic data outcomes have increasingly disappointed relative to consensus forecasts, warning that even this may be too ambitious. If this is coupled with dovish comments from the outgoing central bank chief, the British Pound is likely to find itself facing mounting selling pressure.