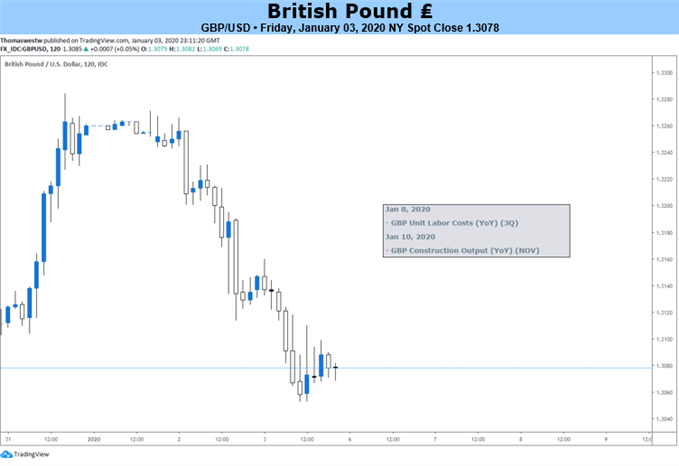 The holiday shortened week saw the Pound close out on a more somber tone having pulled back from 1.3250 to trade south of the 1.3100 handle amid a recovery in the US Dollar. UK data remains soft with both Manufacturing and Construction PMI readings missing expectations, however, keep in mind that these reports cover the heightened political uncertainty in the run-up to the UK election. That said, weak domestic data will likely keep the Pound on the defensive.

On the economic calendar, key UK data remains relatively light with only the UK Services PMI survey on tap. Expectations are for the services sector to remain in contractionary territory at 49.1. Elsewhere, data from the US will likely garner attention with both the Non-Manufacturing PMI and NFP data scheduled.

Perhaps the most notable event for the Pound next week will be the meeting between UK Prime Minister Johnson and EC President Von Der Leyen, scheduled for Wednesday. With the UK parliament voting in favour of Boris Johnson’s Brexit deal on December 20th and the UK set to leave the EU at the end of the month, market participants will be paying close attention to potential comments around the transition period.

As it stands, Boris Johnson has reiterated that he will not extend the transition period beyond the end of December 2020, meaning that the UK and EU would have only 11-months to agree an FTA within that time. However, EC President Von Der Leyen has previously highlighted concerns over not extending the transition period, given that it leaves little time to agree a comprehensive deal.