GBP: Holiday Lull Ahead But Brexit May Break The Calm

We remain neutral on GBP at current levels, mainly due to the currency’s recent heavy falls, but note that even though the UK Parliament is due to break for holiday, starting on Wednesday July 25, that a leadership challenge before the recess remains a possibility. To trigger a vote of no confidence in UK PM Theresa May, the Conservative Party’s 1922 Committee must receive 48 letters of no confidence from MPs. According to recent reports the Committee have already received a large number of votes, with one MP, Andrew Bridgen, saying that Brexit rebels are close to the required number of votes, although any leadership would probably take place after the recess.

Sterling is nearing important levels against both the US Dollar and the Euro and traders will need to remain attentive of any Brexit news next week, especially as the UK data calendar is empty. The British Pound could be left rudderless against any negative news, especially as we enter the summer lull when volumes are traditionally low.

The next important date for sterling traders is next Bank of England MPC meeting on August 2, so-called ‘Super Thursday’ when the MPC’s decision and minutes will be accompanied by the Quarterly Inflation Report. Market expectations of a 0.25% rate hike at this meeting are around 68%, indicating that traders see an increase on the cards.

DailyFX Economic Calendar for the week ahead.

The new UK Brexit minister Dominic Rabb met his counterpart Michel Barnier yesterday in Brussels and the EU will give their view on the UK’s White Paper shortly. The latest rhetoric from the EU is that they are increasing their preparations for a no-deal or hard Brexit while the UK refuse to rule out an agreement, albeit on their terms. 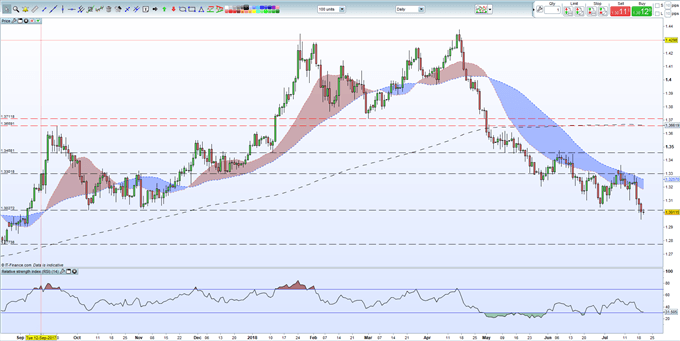