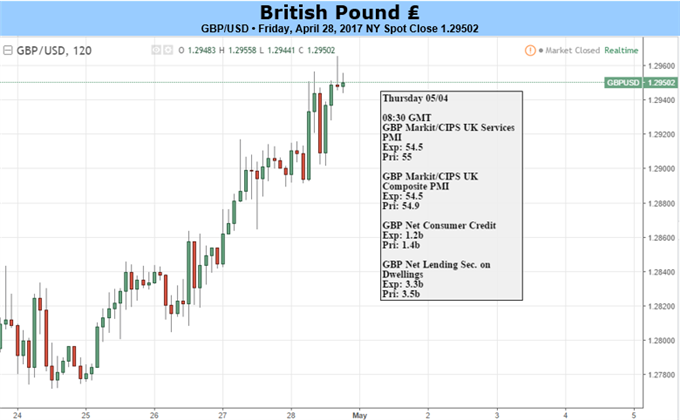 The relief rally in the GBP/USD exchange rate may gather over the days ahead as it breaks out of a near-term holding pattern, but the Federal Open Market Committee’s (FOMC) May 3 interest rate decision may tame the recent advance should the central bank show a greater willingness to raise the benchmark interest rate sooner rather than later.

Even though Fed Fund Futures continue to highlight a greater than 90% probability the FOMC will stay on hold in May, Chair Janet Yellen and Co. may increase their efforts to prepare U.S. households and businesses for higher borrowing-costs as the committee appears to be well on its way to fulfil its dual mandate for full-employment and price stability. The pickup in the core Personal Consumption Expenditure (PCE), the Fed’s preferred gauge for inflation, may push the committee to adopt a more hawkish tone, and the central bank may lay out a more detailed exit strategy as officials look to unload the balance sheet later this year or in early-2018. At the same time, U.S. Non-Farm Payrolls (NFP) are projected to pick up in April, with the economy anticipated to add another 193K jobs, and a batch of hawkish Fed rhetoric paired with a further improvement in labor market dynamics may curb the near-term outlook for pound-dollar especially as the Bank of England (BoE) appears to be in no rush to move away from its easing-cycle.

However, a more bullish scenario may emerge for Cable should the FOMC stick to the current script and attempt to buy more time in response to the lackluster 1Q Gross Domestic Product (GDP) report. The marked slowdown in private-sector consumption, one of the leading drivers of growth and inflation, may prompt the central bank to revisit its economic assumptions as officials warn ‘market-based measures of inflation compensation had remained low; survey-based measures of inflation compensation were little changed on balance.’ Moreover, NFPs may continue to fall short of market expectations as the labor market appears to be at or near full capacity, and a series of dismal developments may fuel the relief rally in GBP/USD as market participants push back bets for the next Fed rate-hike. 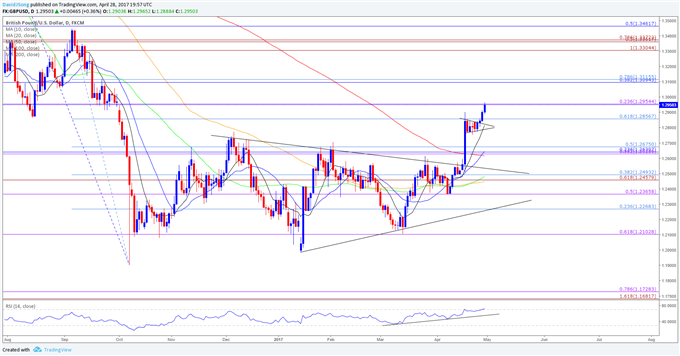 The near-term outlook for GBP/USD remains constructive as it breaks out of a continuation pattern and starts to carve a series of higher highs & lows. The relief rally may accelerate going in May especially as the Relative Strength Index (RSI) extends the bullish formation from March and pushes into oversold territory, with the next topside hurdle coming in around 1.3090 (38.2% retracement) to 1.3120 (78.6% retracement). However, the lack of momentum to hold/close above the former-support zone around 1.2860 (61.8% retracement) to 1.2950 (23.6% expansion) may generate a pullback in the exchange rate, with the first area of interest coming in around 1.2630 (38.2% expansion) to 1.2680 (50% retracement).

Check Out the DailyFX Guides for Additional Trading Ideas 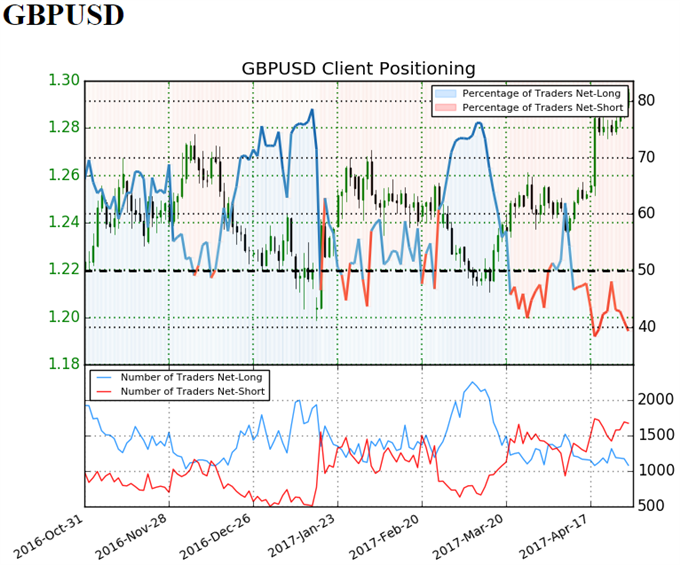 Retail trader data shows 39.3% of traders are net-long GBP/USD with the ratio of traders short to long at 1.55 to 1. In fact, traders have remained net-short since April 12 when GBP/USD traded near 1.24863; price has moved 3.7% higher since then. The number of traders net-long is 12.0% lower than yesterday and 9.3% lower from last week, while the number of traders net-short is 2.2% higher than yesterday and 1.9% higher from last week. May see retail sentiment approach near-term extremes as the crowd appears to be stuck on the wrong side of the market following the breakout in the exchange rate.