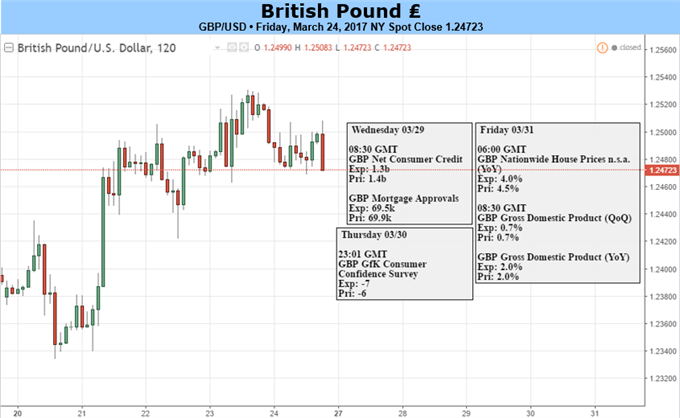 The formal triggering of Brexit on Wednesday is the main event on the UK calendar in the coming week but the markets have become so used to the idea that the UK will leave the EU in due course that it is unlikely to have a significant impact on the British Pound.

Similarly, a debate in the Scottish parliament on independence – delayed until Tuesday because of the London terrorist attack – looks unlikely to have much of an effect because if there is to be a second referendum on independence it will be so far in the future that an impact on Sterling seems remote.

Instead, in a light week for economic data, the same themes that have lifted the UK currency against both the US Dollar and the Euro recently look likely to persist. In particular, the chances of an increase in interest rates by the Bank of England over the course of this year have risen to around 40% and that could extend the Pound’s recent advance.

While concerns about Brexit and a second Scottish independence referendum might perhaps curb those gains, the resilience of the UK economy in the wake of last year’s Brexit decision should outweigh them.

The big surprise so far this month remains the decision by one member of the central bank’s monetary policy committee, Kristin Forbes, to vote for a quarter-point interest rate rise on March 16. While she was outvoted by the other MPC members who all decided to keep rates unchanged, the feeling has grown that a rate rise is on the way later in the year.

Essentially, there are two main reasons why the Bank could move. First, UK inflation climbed to 2.3% in February, above the Bank of England’s 2% target for the first time since late 2013. Second, the UK economy has so far confounded those who predicted a sharp downturn if the British people decided to leave the EU, as they did.

In particular, the first reading of fourth-quarter GDP – up 0.7% quarter/quarter – suggests that the economy is motoring ahead. That figure is likely to be confirmed on Friday, when revised data are published, keeping the prospect of a rate rise firmly on the agenda and helping the Pound to extend its gains.