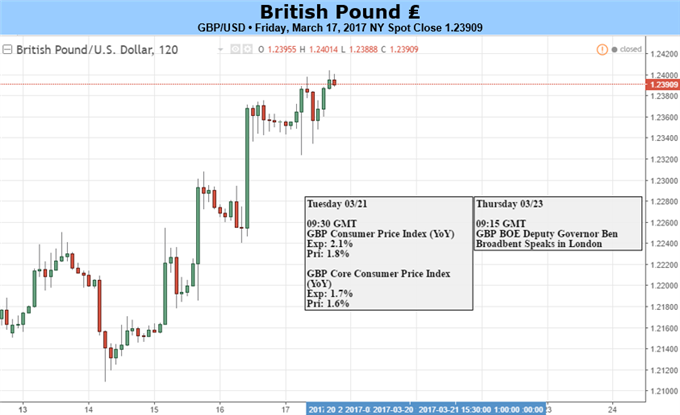 The Bank of England hosted an interesting rate decision this week. No changes were made, and no rates were changed; but what was different was a dissenting vote within the BoE. Ms. Kristin Forbes voted for a rate hike and then explained the logic behind her decision in a follow-up article written for The Telegraph.

The big point of contention right now for the Bank of England is inflation; and the BoE is in a tough spot. The bank had taken a rather aggressive stance around the Brexit referendum. Little was certain in the days after Brexit, as we didn’t even know who would be in-office at 10 Downing Street after the surprise resignation of David Cameron: But what was known was that the Bank of England wasn’t taking matters lightly and would likely be stoking markets with dovish accommodation in the effort of proactively offsetting risks from the referendum. While GBP had started to recover in the days after Brexit, the impromptu press conference from BoE Governor, Mark Carney, in which he foreshadowed what the bank would do helped drag the value of Sterling right back down to the lows (GBP/USD was actually above 1.3000 at the time!). Mr. Carney said that ‘Brexit risks are starting to crystallize’ less than two weeks after the referendum.

In August the BoE launched a ‘bazooka’ of stimulus that entailed the bank buying a significant chunk of the Country’s corporate debt market, and this just depressed interest rates and the value of GBP even more. And the BoE warned that they could do more if need-be; so this was like a constant form of pressure that kept sellers around resistance to eradicate any form of a potential up-trend. In early-October, demand for the British Pound was so abysmal that the ‘flash crash’ happened when a dearth of buyers were unable to offset the rampant selling.

But inflation is unlikely to remain tame when a currency is shedding value at a breakneck-pace. Think of it from the perspective of a company importing products into that economy: If the British Pound falls by 20%, companies importing products from the United States or Europe are going to see a similar 20% hit to revenues, all factors held equal (because those producers have to exchange back-into their currency from a weakened GBP). And for many consumer retail companies, this could be the difference between profitability and losing money. So, to account for the dramatic drop in the value of GBP, producers would need to raise prices; and this is the initial signs of inflation. We started to see this theme come into the fray in early-November when the Bank of England had to upgrade their inflation forecasts just a couple of months after launching their out-sized bond buying program.

Initially the BoE appeared unmoved by those rising inflationary forces, claiming a relatively high tolerance for an ‘inflation overshoot’; giving the appearance that the BoE would remain dovish by stoking low interest rates until it was absolutely necessary to hike rates in the effort of containing inflation. And as the United States saw in the late 70’s with their own saga of stagflation, this can be a difficult prospect because once prices begin to rise, it can be difficult to stop, or even slow (Paul Volcker had to put the U.S. economy into recession with artificially elevated interest rates to stem ‘stagflation’ in the late 70’s).

In January, we started to see a change around the BoE as the bank’s Chief Economist, Andy Haldane, called Brexit the BoE’s ‘Michael Fish’ moment. He remarked that the massive economic slowdown that the BoE thought would come from the Brexit referendum simply hadn’t yet shown up. And further, the radical actions taken in the immediate wake of the referendum exposed the British economy to the potential for higher rates of inflation down-the-road given the additional losses that these dovish moves provided to the currency’s spot rate.

At this week’s BoE rate decision, we saw the first vote for a rate hike post-Brexit, and this came from Ms. Kristin Forbes. The meeting minutes indicated that other members may vote for a rate hike in the coming months, and the reaction since that rate decision has been GBP-strength. In her testimonial, Ms. Forbes says that while Brexit will continue to dominate the news and public debate, the BoE remains steadfast towards their mandate of 2% inflation. She remarked that inflation is already very close to the bank’s target today; but the BoE forecast of 2.7% inflation within a year warrants attention.

While this may be signs of an initial shift within the BoE, it’s simply too early to prognosticate how many members of the MPC may join Ms. Forbes as a dissenting vote at near-term rate decisions. The next Super Thursday isn’t until May 12th, and this is when we’ll receive updated inflation forecasts. Until then, we’re likely going to be reading tea leaves in the effort of seeing just how strong inflationary forces might be in order to tip the BoE’s hand around those next rate decisions; and next week’s CPI print on Tuesday morning will be key for such a theme. Now that we’ve seen a slight shift within the BoE, market sensitivity to stronger forces of inflation could easily increase; bringing gains to GBP on stronger inflationary reads.

For the next week, the forecast on the British Pound will be held as neutral. More signs of confirmed inflationary forces will need to be seen before a bullish forecast can be initiated.