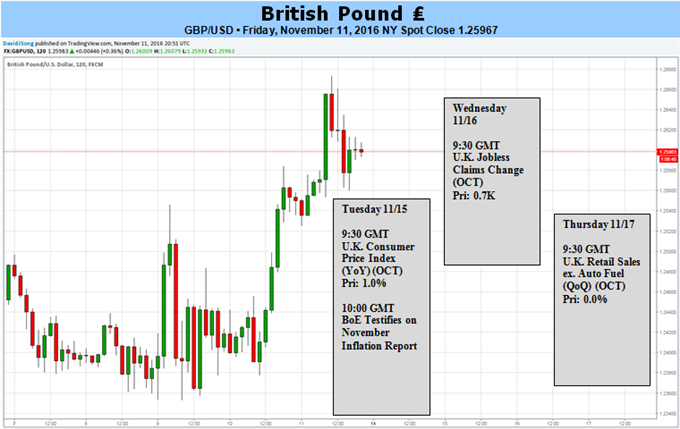 The British Pound may stage a larger relief rally over the days ahead should the key developments coming out of the U.K. raise the outlook for inflation and dampen market expectations for another round of monetary support.

Another pickup in the Consumer Price Index (CPI) paired with signs of stronger household earnings may spark a bullish reaction in the sterling and further shift the monetary policy outlook as the Bank of England (BoE) warns ‘inflation is expected to be higher throughout the three-year forecast period.’ It seems as though the Monetary Policy Committee (MPC) will preserve the current stance at the last 2016 interest-rate decision on December 15 as policymakers now argues ‘monetary policy can respond, in either direction,’ and the central bank may continue to change its tune going into 2017 as officials warn ‘there are limits to the extent to which above-target inflation can be tolerated.’ In turn, market participants may largely react to the fresh comments coming out of the central bank next week as Governor Mark Carney and Co. are scheduled to testify in front of the House of Commons Treasury Committee, and the British Pound may continue to recoup the losses following the U.K. Referendum in June should the BoE show a greater willingness to gradually move away from its easing-cycle.

At the same time, data prints coming out of the U.S. economy may shake up GBP/USD as retail spending is projected to increase another 0.6% in October, while consumer prices are anticipated to pick up for the third consecutive month, but the slew of Fed speeches on tap for the week ahead may do little to boost the appeal of the greenback especially as the permanent-voting members appear to be in no rush to further normalize monetary policy. Even though the Federal Open Market Committee (FOMC) appears to be on course to implement a December rate-hike, Chair Janet Yellen may largely endorse a wait-and-see approach for 2017 as the central bank head is scheduled to appear in front of the Joint Economic Committee on November 17, and more of the same rhetoric may drag on interest-rate expectations as the committee continues to warn ‘market-based measures of inflation compensation have moved up but remain low; most survey-based measures of longer-term inflation expectations are little changed, on balance, in recent months.’ With that said, market participants may pay increased attention to the Fed’s fresh projections coming out at the next quarterly policy meeting on December 14, and the dollar stands at risk of facing headwinds ahead of 2017 should central bank officials continue to cut the long-run interest rate forecast. 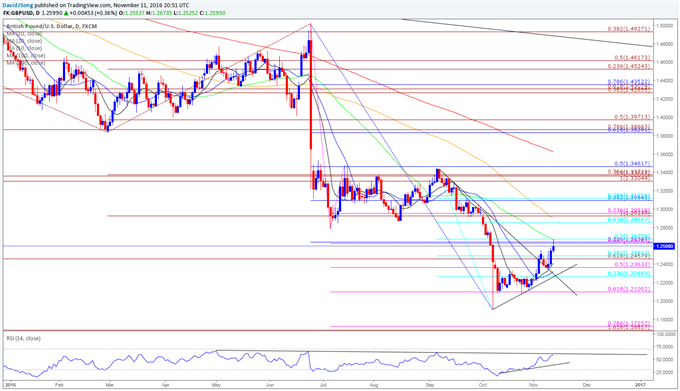 The broader outlook for GBP/USD remains tilted to the downside as the pair preserves the bearish trend carried over from the previous year, but the failed attempts to close below the 1.2100 (61.8% expansion) keeps the near-term focus on the topside targets especially as the Relative Strength Index (RSI) continue to come off of oversold territory. The momentum indicator may highlight a further advance in the exchange rate as it comes up against the downward trend carried over from May, and a bullish RSI trigger accompanied by a break/close above the Fibonacci overlap around 1.2630 (38.2% expansion) to 1.2680 (50% retracement) may spark a run back towards the former-support zone around 1.2920 (100% expansion) to 1.2950 (23.6% expansion).