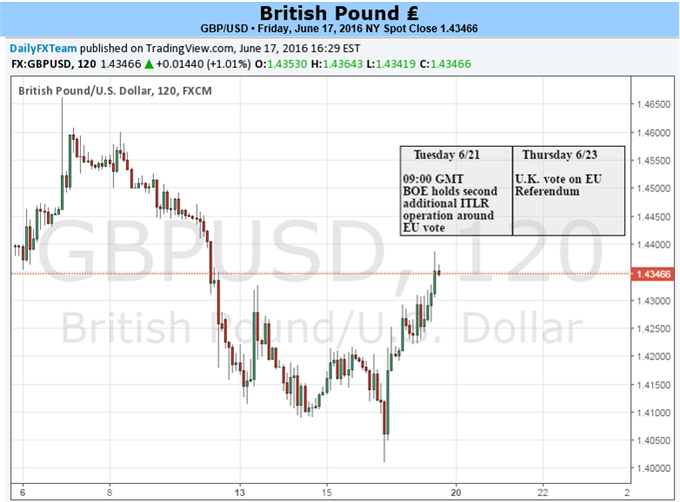 This time next week, unless something unexpected takes place, we will finally have the results of the widely-awaited upon Brexit referendum. Those results are set to be released on Friday morning in the UK from between 7-9AM (2-4 AM Eastern Time), and, frankly, nobody is quite sure what to expect here. While ‘remain’ seemed to be a nearly foregone conclusion just two months ago, a recent series of polls highlighting a majority of voters leaning towards ‘leave,’ has created considerable confusion in the expectations around the referendum.

But the unknown outcome isn’t the only problem with attempting to trade through such events; it’s somewhat of the derivative of that problem that becomes the bigger issue for traders. We’re not the only ones that can see the extreme uncertainty surrounding next week’s referendum, as many banks, institutions, market makers, hedge funds, etc. are all looking at the same prospect of rampant volatility emanating from the vote, the results of which are set to be released while most Americans are still four hours away from hitting the snooze button on a Friday morning. And given that most of these institutional players are professionals that attempt to avoid such scenarios that could potentially lead to complete mayhem, this means that liquidity will likely be far below normal levels, and this only exacerbates that potential for extreme and heightened volatility.

From the Bank of England’s perspective, a vote to exit the European Union could lead to a series of calamitous events that would lead the bank down a daunting path. Mr. Mark Carney had communicated as such at the Bank of England rate decision in May: The Governor of the bank went so far as to say that a vote to leave would entail lower growth, higher inflation, higher unemployment and a ‘sharp’ repricing of the British Pound. That would force the bank into the uncomfortable position of having to mold rate policy to either a) support growth at the behest of continued inflationary pressure or b) move rates higher despite the threat to even deeper unemployment and growth. This is like a downward spiral for Central Bankers because the moves to rates that they pose to handle one series of risks may only intensify the others.

This adds considerable fear to the ‘leave’ side of the referendum; and as polls have filtered-in indicating a majority leaning towards leave, we’ve seen the British Pound sell-off in response. This has naturally led many to plotting a top-side GBP-play in the event of the more probabilistic outcome to ‘stay,’ and while this can make sense, it fails to recognize the fact that there may not be *that* much attractive reward available. Even in the event of a vote to stay, the UK is likely pretty far away from an interest rate hike anytime soon.

Over the past few months we’ve seen UK data worsen as the Brexit debate has raged-on. At first this was being chalked up to businesses tightening their risk outlays ahead of the referendum. But just last month, Kristin Forbes of the BoE floated the idea that the recent down-tick in data may not be entirely related to Brexit. And fellow BoE member, Gertjan Vlieghe echoed these sentiments in saying that he felt any ‘Brexit Bounce’ after a vote to stay may be short-lived. Mr. Vlieghe even went so far as to say that low rates may be on the table for the BoE for years, or perhaps even decades; and went on to suggest that the BoE should be ready to cut interest rates in order to stimulate spending in the event that the short-lived Brexit bounce comes from the vote to stay.

So, even if the voters of the UK decide to stay, we’re probably not looking at a long-term bullish scenario for the UK as the economy struggles with many of the same ills plaguing the world at-large with an aging population and extremely elevated levels of consumer debt. If voters do decide to stay we’ll merely have crossed this most recent risk factor as the Bank of England attempts to address the next set of risks.

Given this threateningly uncertain backdrop, in which even if one knew how the referendum would pan out, they’d have no way of forecasting price movements around such a decision given the expectation for extremely low liquidity, we’re setting our forecast on the British Pound at neutral for the week ahead.

Retail traders may be best served by following what many institutional traders are doing for this event, which is tightening up risk and preparing to watch the referendum from the sidelines; or at the very least looking to trade these themes in markets not directly linked to the performance British Pound.