Sterling Continues to Strengthen With Brexit Vote a Month Away 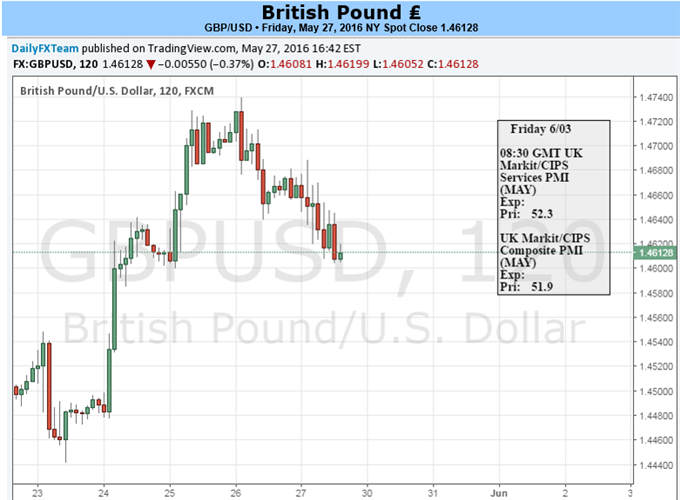 We are now less than four weeks from the vote waited upon around-the-world; and that is the decision that UK voters will tackle on June 23rd that will decide the fate of the continued EU-membership for the United Kingdom. Most of the sources that have went on record to discuss the ramifications of this upcoming vote have universally panned the idea of the UK leaving the EU. This includes multiple Bank of England members, with a huge warning coming from the BoE Governor Mark Carney less than a month ago at the most recent Super Thursday batch of announcements.

At that meeting, Mr. Carney said that while unsure of the exact repercussions should voters elect to leave the EU, it would likely entail higher unemployment, higher inflation, lower growth and a sharp decline in the value of the British Pound. And this devaluation in the British Pound may only add even more inflationary pressure to the UK economy, which would put the bank in the unenviable position of having to decide to mold policy towards tempering inflation (which would entail higher rates, which would bring even slower growth) or boosting growth (which would lead to even greater inflation, and an even weaker GBP). Unfortunately the bank wouldn’t be able to tackle both at the same time as each scenario presents a diametrically opposing set of risks and potential outcomes.

Nonetheless, the confidence with which these warnings have been delivered has seemed to resonate across capital markets, as the past three months have seen a rather remarkable turnaround in the spot rate of GBP-pairs while the debate behind ‘Brexit’ has raged on. As we entered March, doom and gloom appeared to be on the horizon as GBP/USD sank to a fresh seven-year low, trading at levels that hadn’t been seen since the Financial Collapse. But over the past three months GBP has clawed back all of those losses and then some; and more recently, as in over the last couple of weeks, the British Pound has been one of the strongest currencies in the world.

The economic calendar does have quite a few releases out of the UK next week; but all are low and medium-importance announcements. Further, these data releases may be taken with a grain of salt unless the print is far outside of expectations; as much of the focus and attention around the British Pound is squarely focused on the June 23rd referendum.

On a technical basis, recent price action structure has been bullish in nature as we noted earlier, and for those traders looking for a currency to fade the recent bout of strength in the US Dollar, the British Pound may not be an unattractive option. The technical level on GBP/USD at 1.4572 is particularly interesting, as this is the 61.8% retracement of the 30-year move in the pair, taking the 1.0500 low in 1985 up to the 2.1160 high set in 2008 just before the Financial Collapse. This was also the 2015 swing-low in GBP/USD, and has continued to carry relevance into trading throughout 2016. This could be an interesting level to look for support in the pair.

However, due to the extreme opacity surrounding the upcoming referendum; with most polls showing a relatively even split amongst votes to ‘leave’ or ‘stay,’ and considering the profound economic impact that either decision may have on the economic future of the United Kingdom, the fundamental forecast for the British Pound will remain at neutral until one of the underlying facts change.