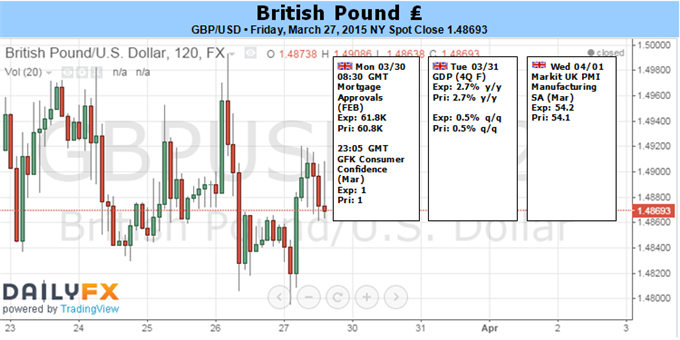 British Pound Forecast to Fall Further Across the Board

The British Pound fell for the third week of the past four versus the US Dollar, hurt by disappointing economic data and generally dour trading sentiment. Traders could push the Sterling to fresh lows on a key week ahead for the US Dollar and other currencies.

A relatively quiet week for UK economic event risk will keep traders focused on key event risk out of the United States and continental Europe. Yet any important surprises in final revisions to Q4, 2014 Gross Domestic Product growth figures could force GBP-led moves through Tuesday. Larger GBP/USD volatility nonetheless seems more likely on upcoming US Nonfarm Payrolls figures as the US Dollar itself remains volatile.

Interest rates remain the main driver of British Pound moves, and a disappointing UK Consumer Price Index inflation report sent domestic yields and the GBP noticeably lower. Traders had previously sent the British Pound and US Dollar higher versus major counterparts as the Bank of England and US Federal Reserve were the only central banks within the G10 expected to raise interest rates in 2015. Yet a significant correction in GBP/USD yield differentials helps explain recent Sterling underperformance, and it’s difficult to envision a meaningful recovery in BoE yield expectations through the foreseeable future.

Political uncertainty further clouds outlook for the British Pound with UK elections due through early May. FX options traders are clearly bracing for the political risks as GBP/USD volatility prices jump to their highest since the Scottish referendum. Traders remain skittish, and recent CFTC Commitment of Traders data showed that large speculators increased their net-short GBP position for the third-consecutive week.

The British Pound remains at risk ahead of a key week for the US Dollar, and it may take a substantial shift in trader sentiment to force a meaningful GBP recovery.