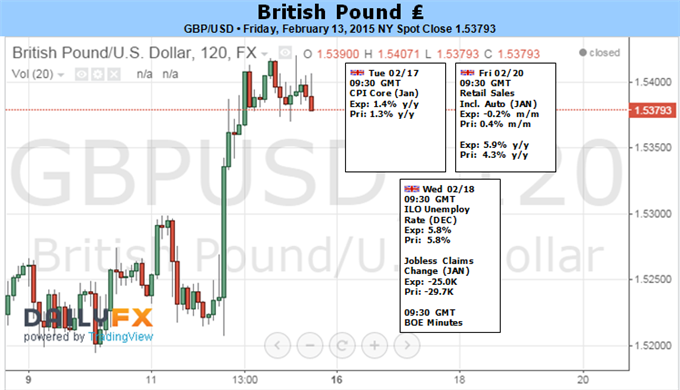 The British Pound rose for a third consecutive week against the US Dollar after a hawkish-sounding Bank of England Quarterly Inflation Report rekindled interest rate hike speculation, as expected. Governor Mark Carney reminded investors that tightening is the next most likely direction for monetary policy, adding that the central bank intends to look past near-term downside inflation shocks from falling food and oil prices. Investors now price in at least one 25 basis point increase in the baseline lending rate over the coming 12 months, with futures markets reflecting bets on a move in the fourth quarter of this year.

Sterling can hardly expect to coast upward unmolested however. There is much that can happen between now and the end of the year that can upend the currency’s recovery. The revival of Eurozone redenomination risk stands out in the near-term as nervous markets prepare for another round of negotiations between Greek and EU officials over the country’s debt woes on Monday. A similar sit-down produced no results last week and the situation looks increasingly intractable: Greece’s government won a key confidence vote, confirming its mandate to scrap the existing EU/IMF bailout program. Meanwhile, German Finance Minister Wolfgang Schaeuble bluntly dismissed rumors of a 6-month extension on Greek debt repayments as “wrong”.

Both sides face negative fallout without an accord. Eurozone officials don’t want to endanger the bloc’s structural integrity by setting a precedent for a country to leave, an outcome with unknown consequences. Meanwhile, the newly-minted Greek administration surely understands its survival depends on ending economic hardship, which voters equated with EU-imposed austerity. Its fortunes might swiftly turn if a disorderly “Grexit” fails to end the malaise or compounds it.Political brinksmanship has been the status quo throughout the Eurozone debt crisis, so more of the same before a stay of execution is cobbled together is not surprising. If Monday’s meeting elevates hopes for a deal, the Pound is likely to face selling pressure as capital inflows seeking refuge from Euro-linked instability reverse course.

Furthermore, the markets’ policy bets will continue to evolve with incoming economic news-flow. The coming week features a potentially formative bit of event risk as January’s CPI figures cross the wires. The headline year-on-year inflation rate is expected to drop to 0.4 percent, the lowest since at least 1989, but Mr Carney’s sanguine posture on this front will likely dilute the figures’ potency. Instead, all eyes will be focused on the core CPI print – a reading that excludes the influence of volatile items the BOE has opted to dismiss – which is expected to rise for a second month to 1.4 percent. UK price growth data has broadly tended to underperform relative to consensus forecasts over the past two years. If that trend continues and a soft core reading emerges, Sterling may retreat as rate hike expectations cool anew.