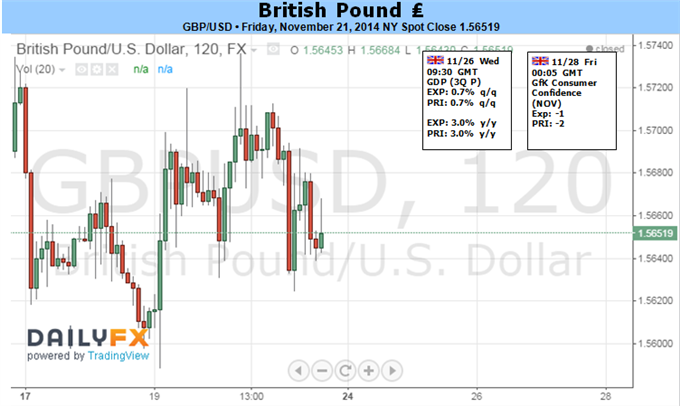 GBP/USD may face a more meaningful rebound in the week ahead as the Bank of England (BoE) highlights the risk of overshooting the 2% target for inflation, while the Federal Reserve remains reluctant to move away from its zero-interest rate policy (ZIRP).

With the BoE scheduled to testify in front of the Parliament’s Treasury Select Committee next week, the fresh batch of central bank rhetoric may heighten the appeal of the British Pound should Governor Mark Carney continue to prepare U.K. households and businesses for higher borrowing costs. Even though the BoE Minutes showed another 7-2 spit at the November 6 meeting, it appears as though there’s a greater dissent within the Monetary Policy Committee (MPC) as the faster-than-expected erosion of economic slack raises the risk for above-target inflation. In turn, we may see a growing number of BoE officials scale back their dovish tone for monetary policy, while the Fed may further delay its normalization cycle amid the subdued outlook for U.S. inflation.

The preliminary 3Q U.S. Gross Domestic Product (GDP) report may serve as another fundamental catalyst to drive GBP/USD higher as market participants anticipate a downward revision in the growth rate, while the core Personal Consumption Expenditure, the Fed’s preferred gauge for inflation, is expected to grow an annualized 1.4% after expanding 2.0% during the three-months through June. As a result, central bank Chair Janet Yellen may largely endorse a more neutral tone for monetary policy going into the end of the year, and 2015 rotation for the Federal Open Market Committee (FOMC) may further dampen the appeal of the U.S. dollar as central bank hawks Richard Fisher and Charles Plosser lose their vote.

With that said, GBP/USD may make a larger attempt to break out of the narrow range on the back of hawkish BoE commentary along with a series of dismal U.S. data, and we would also like to see a topside break in the Relative Strength Index (RSI) as the oscillator retains the downward momentum carried over from the previous month.