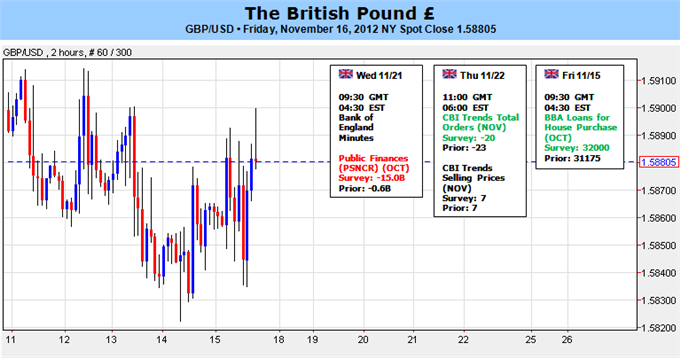 The British Pound finished in the middle of the pack this week, as there was little volatility among all of the majors but for the Japanese Yen, while data out of the United Kingdom was mixed enough to keep the Sterling range-bound for the entire week against the Euro and the US Dollar. The EURGBP rallied by +0.31% while the GBPUSD added a mere +0.08%; and while the British Pound was the weakest of the three, it also faced new obstacles that market participants haven’t had priced in. It is for these reasons that we must maintain a bearish forecast for the British Pound, with a small possibility for another middle of the road performance over the coming five days.

If there was ever a swath of data that threw Pound traders for a loop, it was the combined influence of the October consumption, inflation, and labor market data that came out between Tuesday and Thursday. On Tuesday, the October Consumer Price Index showed a yearly rate of +2.7% versus +2.4% y/y expected, while the yearly Core rate was +2.6% versus +2.2% y/y expected. Needless to say, price pressures are much higher than policymakers have indicated over the past several months. The October CPI proved positive for the Pound, but the enthusiasm was quickly dampened.

Stagflation is defined as an economic symptom in which ‘growth rates are low, inflation is high, and unemployment is high.’ Certainly, these conditions are developing: the third quarter quarterly GDP rate was barely +1.0%, predicated around the London Olympics and fewer bank holidays than in the second quarter, both of which assuredly provided a one-off boost to growth; the October CPI showed that inflation rates are running higher than the broad investing public forecast; and the rate at which new jobs are coming to the economy is slowing, despite a lower ILO Unemployment Rate – the rise in October Claims suggests a degree of hopelessness might be setting in (we’ll be watching the Participation Rate as an indicator of organic labor market growth).

Bank of England Governor Mervyn King issued a similar assessment of the economy, saying “We face the rather unappealing combination of a subdued recovery with inflation remaining above target for a while…There are limits to the ability of domestic policy to stimulate private-sector demand as the economy adjusts to a new equilibrium.” In response, with growth the focus and inflation apparently being offered up as a sacrifice, which will inherently strain consumers’ wallets and hurt headline consumption totals, and in turn, GDP, the BoE could pursue additional quantitative easing, with Governor King noting,“the committee has not lost faith in asset purchases as a policy instrument, nor has it concluded that there will be no more purchases.”

As the calendar turns to the Thanksgiving holiday week in the United States, and little significant data due out on the British Pound’s docket, we expect this decisively dovish tone issued by Governor King to carry the Sterling lower. The one significant release this week, the Bank of England Minutes on Wednesday, will likely reiterate these concerns Governor King outlined. As such, if there is any upside momentum at the beginning of the week, Wednesday might be the turning point; in either case, it will be easier down than up the next five days. –CV