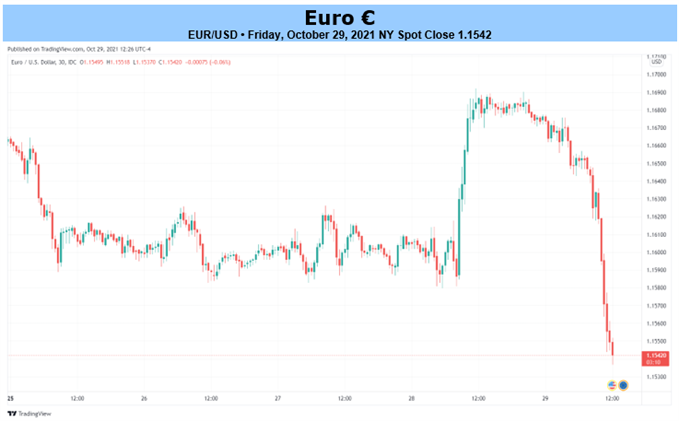 The long trend lower in EUR/USD, which took it down from a high at 1.2266 on May 25 to a low at 1.1524 on October 12, looks to be ending, with last week’s price action suggesting that a rally is now on the cards after a couple of weeks of sideways trading.

As expected, the European Central Bank’s policy-setting Governing Council decided Thursday to leave monetary policy unchanged, but the reaction to its President Christine Lagarde’s subsequent news conference was fascinating. She pushed back hard against market pricing suggesting the ECB will increase Eurozone interest rates next year, insisting that above-target inflation will have fallen by then.

Lagarde agreed that it could increase further short-term but insisted that price pressures will ease over the course of the year as factors such as higher energy prices drop out of the equation. Yet, instead of the markets moving to price in easier monetary policy than previously expected, they moved to price in a tightening of policy even earlier than previously predicted.

In response, EUR/USD pushed higher, as shown by the five-minute chart below.

For a central bank chief, this is worrying as credibility is important in the role. It also means the ECB may not, as previously expected, signal a move towards reducing its monetary stimulus programs at its December meeting, where new staff economic projections will be available. Nonetheless, Thursday’s advance in EUR/USD gives us an indication that a stronger rally in the pair has now begun after the previous five-month downtrend.

Turning to the week ahead, the Euro will likely be buffeted by events outside the Eurozone, notably central bank policy decisions in Australia, the US and the UK on Tuesday, Wednesday and Thursday respectively, as well as October US non-farm payrolls data Friday. Eurozone data releases are largely second-tier, including German retail sales, factory order and industrial production, and Eurozone retail sales and unemployment.