The coming week is packed with potentially high-impact market-moving economic data from the Eurozone and, ahead of it, the slide in EUR/USD that began last Thursday is most likely to continue. What happens after the numbers, that are mostly unveiled on Thursday and Friday, depends of course on how strong or weak they are but last week’s policy statement by the European Central Bank was so dovish that further Euro losses are now highly likely.

In a nutshell, the ECB and its President Christine Lagarde made it crystal clear that Eurozone monetary policy will remain highly accommodative for the foreseeable future, with its deposit rate not rising from minus 0.5% until inflation hits 2.0% and stays there. It would indeed allow “a transitory period” in which inflation is moderately above its new 2% inflation target, the ECB said.

That reinforces the view that the ECB will be one of the last major central banks to tighten monetary policy and that the Euro could therefore remain weak not just against the US Dollar but all round. 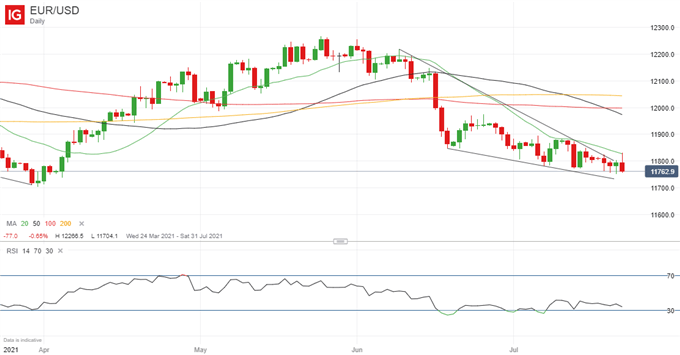 Week ahead: GDP, inflation and unemployment

On a normal week, the release of Germany’s Ifo index for July Monday and of the GfK version of German consumer confidence in August Wednesday would be the focus, but both will be outweighed by the official statistics out later in the week. For the record, analysts are expecting marginal improvements in both, suggesting that the global economic recovery has not yet been derailed by the spread of the delta variant of Covid-19.

However, given the markets’ current fixation on inflation, it will be the German July consumer price index numbers Thursday and the equivalent data for the Eurozone Friday that will likely attract most attention. The consensus among forecasters is that headline German inflation jumped to a preliminary 3.2% in July, up from 2.3% the month before, but that the Eurozone number just edged up to 2.0% from 1.9%, bang in line with the ECB’s target.

At this point in the economic cycle, labor-market data are less important but the forecast fall in the German unemployment rate to 5.8% in July from 5.9% the month before would round out the picture of a continuing economic recovery and one which the ECB is in no hurry to nip in the bud by tightening monetary policy prematurely.