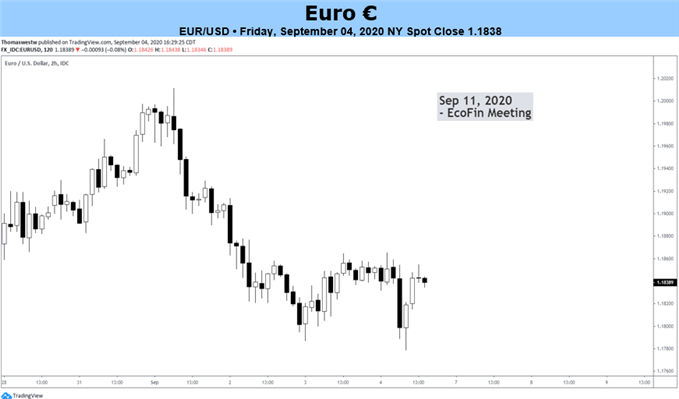 Last week was an important one for the Euro and this week will be too as traders wait for confirmation that the European Central Bank does not want to see the EUR/USD exchange rate above 1.20. As long as ECB President Christine Lagarde does not contradict officials’ guidance this past week, it means there is now huge resistance at 1.20, with any attempt by traders to push the price above it likely to be met by fierce ECB opposition. In other words, from here, EUR/USD weakness is more likely than further strength.

First up last week was Philip Lane, the central bank’s chief economist, who told a seminar that the Euro’s level “does matter” – just after EUR/USD hit a high of 1.2011, its strongest since May 2018. His comment, not long after Federal Reserve Chair Jay Powell committed the Fed to a more stimulative policy stance, suggested the ECB is prepared to match the Fed as the Eurozone’s central bank faces a likely fall in inflation to -0.2% in August from +0.4% in July.

Just a day later, The Financial Times reported that several members of the ECB’s Governing Council had told it that the Euro’s rise against the US Dollar and many other currencies risks holding back the Eurozone’s economic recovery. “In the last few weeks there has been an appreciation of the Euro, which is always worrisome when you have weak demand, especially as the Euro area is the most open economy in the world and unusually dependent on global demand,” it reported one council member as saying.

This suggests that, as one commercial bank put it, that the ECB has drawn a line in the sand at 1.20 and that EUR/USD will now likely consolidate below that level and quite possibly fall back. 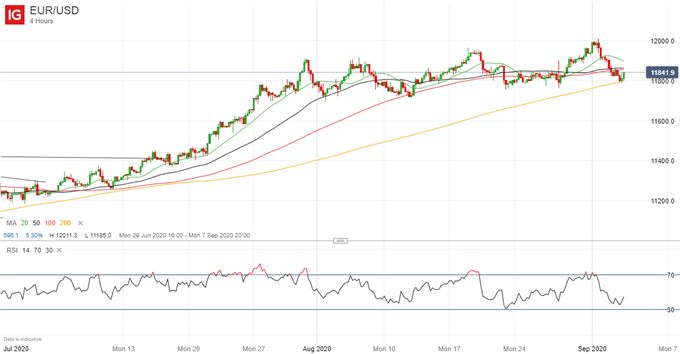 Lagarde is sure to be asked about all this when she holds her news conference Thursday after the results are released of the Governing Council meeting, which will almost certainly end with all the ECB’s monetary settings left where they are currently – and it would be a major surprise if she failed to back her team.

Meanwhile, note that net-long positions in the Euro are at a record high, according to the US Commodity Futures Trading Commission’s Commitments of Traders report, and that suggests any drop in EUR/USD could accelerate sharply on long liquidation.

Against this backdrop, data in the week ahead will likely be ignored, and will be sparse anyway, with German industrial production Monday and trade data Tuesday the highlights.