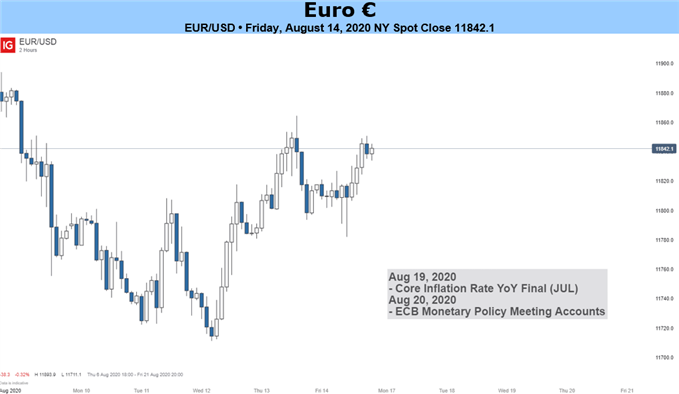 The Euro may rise if preliminary Q2 GDP data print better-than-expected figures and reinforce the hopeful narrative that economic stabilization is underway. An improvement in the outlook may then reduce the sense of urgency among monetary policymakers to deliver stimulus as aggressively. Analysts estimate for GDP to contract 12.1% on a quarter-on-quarter basis and -15.0% on a year-on-year basis.

The Citi Group Economic Surprise Index (CESI) for the Eurozone shows that data has been significantly outpacing expectations. This could suggest that either policymakers overestimated the severity of the recession or the economy is bouncing back with greater vitality than expected – or some combination of the two.

Euro Has Risen With Inflation Expectations and Better-Than-Expected Data

Having said that, investors would do well to heed the earning of the president of the central bank from the US, Jerome Powell. The Fed’s chair warned that officials and traders alike ought to show caution in extrapolating the implications of a single or few data points.

The “considerable” uncertainty of the circumstances can be reflected in economic statistics. This in turn risks giving the market a false sense of security, potentially triggering an aggressive correction, manifesting as a re-alignment of reality and hope.

In this scenario, the Euro may wilt versus the haven-linked US Dollar and Japanese Yen, though it would likely fair far better against commodity-linked currencies, particularly those in Europe like NOK and SEK. Policymakers may also want to avoid tightening to quickly. A lack of liquidity in the current environment, particularly in the swollen corporate debt market, could catalyze a multi-order ripple effect and undermine financial stability.

Euro Rise May be Amplified by PMI Data

The Euro’s rise may also be amplified if preliminary Markit manufacturing, services and composite PMI data for August point to strengthening economic prospects. All three indicators are above the 50.00 threshold, where a reading below it indicates contraction and above an expansion. Considering data has been outperforming expectations, it would not be outlandish to see PMI statistics falling in line with expectations.

The Euro will also be closely watching the release of the European Central Bank’s (ECB) account of the July policy meeting. Officials radiated waves of support, indicating that they will do whatever it takes within the parameters of their mandate to stabilize financial volatility and restore economic integrity. While the minutes may not produce immediate volatility, the content of the text may offer previously-unavailable insight.