Euro Adrift amid Light Calendar, at Whims of Other Currencies 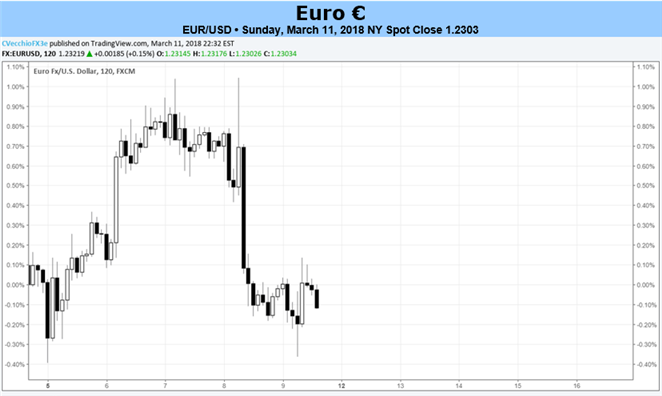 - Bearish daily key reversal in EUR/USD after the ECB meeting on Thursday warns of further downside for the Euro.

- Upcoming calendar this week is exceptionally light, meaning the Euro isn’t in control of its own fate over the coming days.

The Euro was the third-worst performing major currency last week, only outpacing the Japanese Yen and Swiss Franc amid a rebound in global risk appetite. Despite the European Central Bank dropping its pledge to increase its QE program again over the coming months, market participants also heard from ECB President Mario Draghi that rates would remain low until inflation gets back to their +2% medium-term target – something not expected to happen over the next three years.

Indeed, looking at inflation expectations, markets don’t seem to be of the belief that price pressures are increasing in any meaningful fashion. The 5-year, 5-year inflation swap forwards, Draghi’s preferred gauge of price pressures, finished last week at 1.710%; a month ago, they were at 1.750%. Needless to say, inflation expectations are moving in the wrong direction, which serves to undercut the Euro in the near-term.

And while the ECB’s Governing Council dropped the pledge to raise QE if necessary is a reflection of the improved growth drop for the Eurozone, recent developments on the economic data front have been disappointing. The Citi Economic Surprise Index for the Eurozone finished last week at -21.6, down from -0.5 on March 2; but the dip into negative territory is seen as even more dramatic considering it was at +42.7 just four weeks ago.

The calendar in the week ahead doesn’t appear to offer any ‘off ramps’ for the Euro to exit from its current highway of disappointment: there are no ‘high’ importance data releases due out. Similarly, the inflation data due out is the final February CPI report, which isn’t expected to show any positive change in price pressures from the initial reading (headline at +1.2% from +1.3%, core at +1.0% unch (y/y)).

Futures positioning suggests downside might be easier than upside given the disappointing backdrop – net-longs held by speculators are at +134K contracts through the week of March 6, barely down from +138K in the week prior. Accordingly, the bearish daily key reversal in EUR/USD after the ECB meeting on Thursday warns of further potential for downside for the Euro. While the Euro might be on the move due to news – trade war headlines in particular – the light calendar means the Euro is left to the whims of the other major currencies.