Can the Euro Continue to Defy a Dovish ECB and Soft Data Flow? 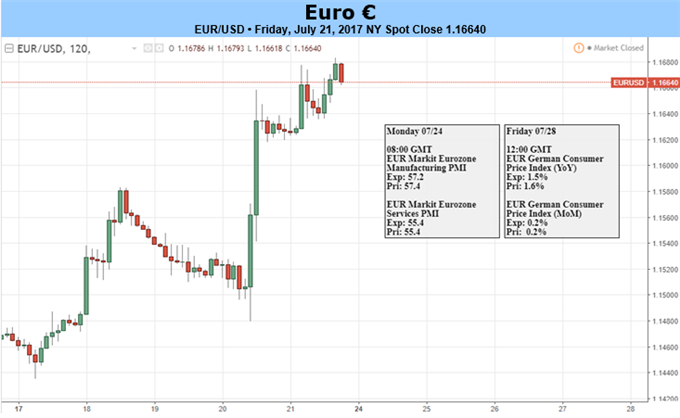 What do retail traders’ buy sell decisions say about the Euro price trend? Find out here.

The Euro’s relentless upward march would not be denied last week. Even a pointedly dovish ECB policy announcement failed to slow the advance. In fact, the passing of the rate decision seemed to open the floodgates for a wave of buying, as though bulls were just waiting for the coast to clear.

According to the newswires, investors latched on to a comment in the post-meeting presser with ECB President Mario Draghi where he said the QE program would be reviewed in autumn. When asked if that meant the September policy meeting, he snapped that if it did, he would have said so.

Did the markets pick through a sea of dovish rhetoric to fish out the one pseudo-supportive remark on offer to justify an explosive Euro rally? Perhaps, but that explanation seems fanciful, particularly since revisiting the size of asset purchases has been largely expected in September along with a forecast update.

On balance, either speculation has become disconnected from fundamental news-flow or monetary policy is not truly the central narrative at play. A much-needed dose of clarity may emerge in the coming days as top-tier economic data and official commentary cross the wires.

The preliminary set of July’s Eurozone PMI surveys and German CPI figures bookend the week ahead. Both are expected to head south, with the pace of nonfarm activity growth at the slowest since February and headline inflation dropping back to 1.5 percent, matching the six-month low set it May.

News-flow out of the currency bloc has deteriorated relative to consensus forecasts since the beginning of the month, hinting that analysts’ models may be overstating the economy’s vigor. That opens the door for more downside surprises, undermining the case for a hawkish policy pivot.

Turning to the speaking docket, ECB Director General for Economics Frank Smets is due to speak. He might offer a flavor for the direction of the forthcoming forecast update. If his remarks echo the dovish posture of Mr Draghi, the case for imminent tightening will be even harder to defend.

The Euro’s response to these developments ought to prove telling. If prices buckle under the weight of disappointing headlines, a level of sensitivity to the fundamentals will be re-established. If the news proves better than expected and the rally extends, that too will be an encouraging sign of normalcy.

On the other hand, a stubborn push to higher highs against a backdrop of what would otherwise seem like negative developments might speak to speculative overreach. If the rally truly appears to be running on fumes, a violent reversal might be in the cards before long.

In practical terms, such a turn is likely to be most profoundly expressed as Euro weakness against the US Dollar, Yen and British Pound. These currencies have suffered against it even as the commodity bloc scored gains over the past two months, presumably because the ECB edged up in expected policy rankings.