The price of gold appears to be on track to test the 50-Day SMA ($1743) following the failed attempt to test the monthly low ($1689), but fresh data prints coming out of the US may curb the recent rebound in bullion as the Consumer Price Index (CPI) is anticipated to show sticky inflation.

Recent price action raises the scope for a larger rebound in the price of gold as it initiates a series of higher highs and lows, with the Relative Strength Index (RSI) highlighting a similar dynamic as it reverses ahead of oversold territory.

However, the update to the US CPI may drag on the price of gold as the core reading, which strips out volatile items like energy and food prices, is expected to widen to 6.0% in August from 5.9% per annum the month prior.

Signs of sticky price growth may encourage the Federal Reserve to retain its current approach in combating inflation as Vice-Chair Lael Brainard insists that “it will be necessary to see several months of low monthly inflation readings to be confident that inflation is moving back down to 2 percent,” and it remains to be seen if the Federal Open Market Committee (FOMC) will adjust the forward guidance at the next interest rate decision on September 21 as the central bank is slated to update the Summary of Economic Projections (SEP). 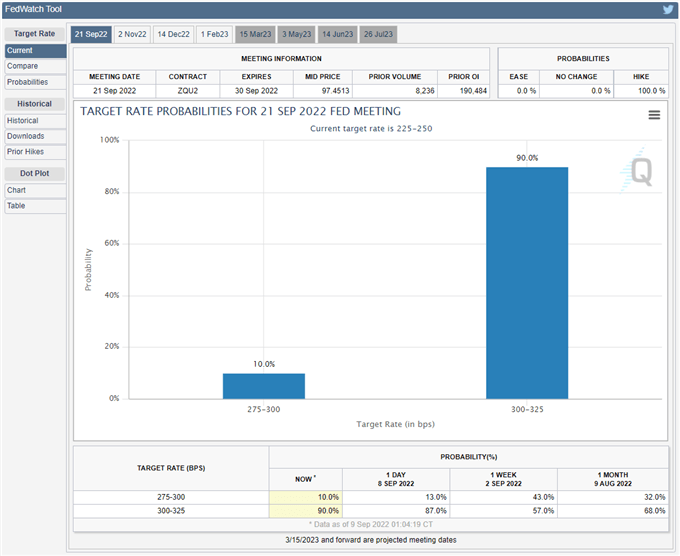 Until then, speculation for higher US interest rates may produce headwinds for bullion as the CME FedWatch Tool reflects a 90% probability for another 75bp rate hike, and the price of gold may continue to track the negative slope in the 50-Day SMA ($1743) as the FOMC moves towards a restrictive policy.

With that said, the recent rebound in the price of gold may end up being a correction in the broader trend as the Fed sticks to its hiking-cycle, but recent price action raises the scope for a larger recovery in bullion as it initiates a series of higher highs and lows following the failed attempt to test the monthly low ($1689).