As anticipated in the Q2’22 gold forecast, the main catalyst that drove gold prices higher in Q1’22 – the Russian invasion of Ukraine – proved to be a short-lived catalyst. The conflict has been largely contained, insofar as the European Union, the United States, and NATO have not been drawn in. The net-result: gold prices erased all their gains from Q1’22 in Q2’22, and now are effectively unchanged year-to-date.

Our longstanding rationale remains valid and was brought back into focus as Q2’22 progressed: central banks, including the Federal Reserve, have begun to winddown pandemic-era stimulus efforts, with rate hike cycles just getting started. Inflation expectations remain relatively stable, and amid rising nominal yields, real yields have risen sharply in recent months.

The challenge for gold prices in Q3’22 persists barring further escalation in the conflict between Russia and Ukraine, drawing in the EU, the US, and NATO into a widespread conflict, there are few bullish catalysts on the horizon. The macro fundamental environment should prove increasingly difficult for gold prices as Q3’22 progresses, particularly now that all major central banks – save the Bank of Japan – have wound down their stimulus efforts.

US Real Yields a Headwind, Still

We’ve been a bit of a broken record for the past few quarters, but that’s because the obstacles in front of gold prices have not changed in a material fashion. Central banks acting more aggressively to arrest persistently higher realized inflation in the short-term are pushing up sovereign bond yields across the curve. Longer-term inflation expectations have not risen significantly, sending higher real yields.

Gold, like other precious metals, does not have a dividend, yield, or coupon, thus rising sovereign real yields – particularly US real yields – remain problematic. Put another way, when other assets are offering better risk-adjusted returns, or more importantly, offering tangible cash flows during a time when inflation pressures are raging, then assets that don’t yield significant returns often fall out of favor. Gold behaves, in effect, like a long duration asset (as measured by modified duration, not Macaulay duration); a zero-coupon bond. 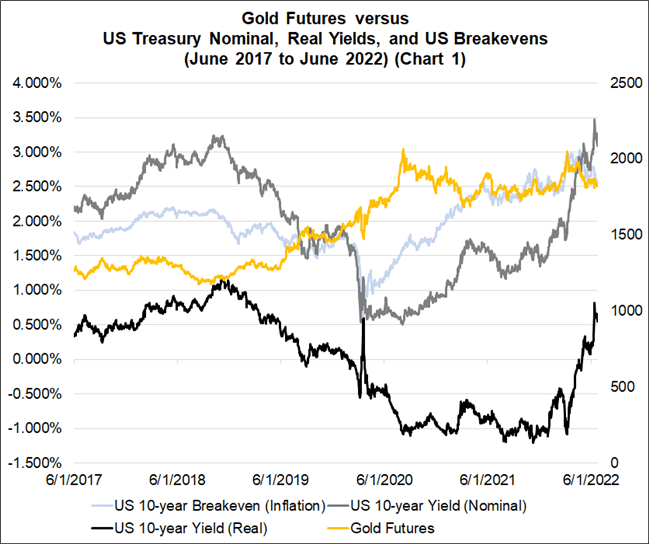 The circumstances surrounding gold prices haven’t changed, even as the Russian invasion of Ukraine is set to enter month five. Pandemic era fiscal and monetary stimulus are a historical footnote, unlikely to be revived anytime soon. As Russia’s invasion of Ukraine has provoked higher food and energy prices in economies like the EU, the US, and the UK, central banks will continue to raise interest rates aggressively during Q3’22. 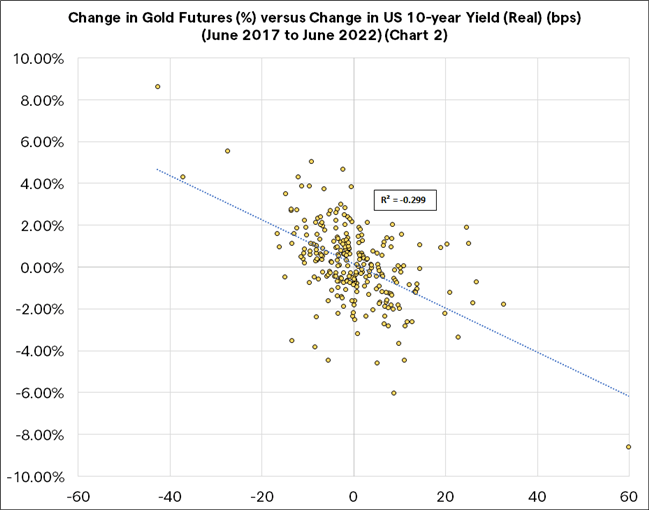 In a sense, not much has changed. To reiterate what was said in the Q2’22 forecast, “barring World War 3, it’s difficult to envision how the environment becomes any more appealing for gold prices from a fundamental perspective.” Over the next few months, gold prices have two likely paths forward: sideways (elevated food and energy prices pushed inflation expectations higher as central banks raise rates, keeping the status quo in real yields); or lower (stability in inflation expectations as central banks raise rates, pushing higher real yields).