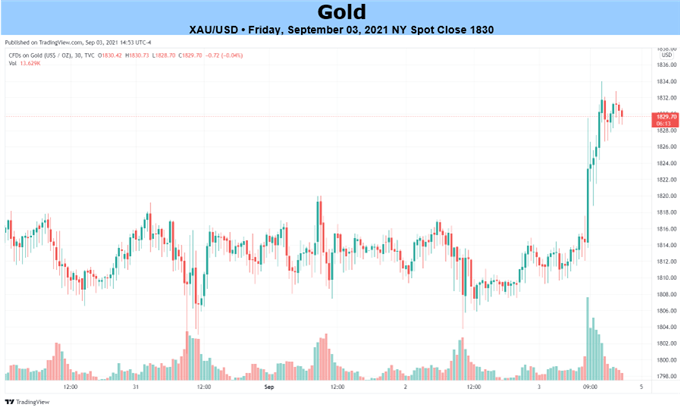 Teaser: Dismal NFP jobs data and a weaker dollar helped boost gold prices on Friday. We take a look at the week ahead to assess whether the move is likely to gain momentum

Gold Shines on Friday After Worse than Expected Jobs Data

Gold shot up in response to the worse than expected NFP data as can be seen from the 5-minute chart below: 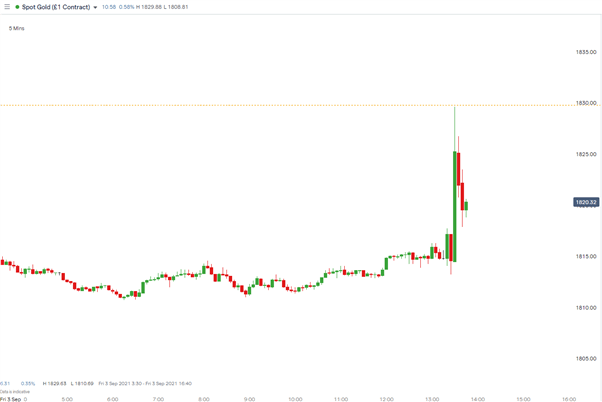 The rate of new jobs being added to the world’s largest economy slowed on Friday after only 235k of an estimated 750k new jobs were created. The number, while still positive, is disappointing considering figures for June and July were 962k and 1053k, respectively.

The meagre number is important in the context of the Fed’s interpretation of ‘substantial progress’ being made in the jobs market – the sector of the economy which has seen mixed progress since the start of the pandemic.

Members of the Federal Open Market Committee (FOMC) will certainly take the August figure into consideration before this month’s Fed meeting (22 September) to determine whether the job market has come far enough to ease stimulatory bond and asset purchases. A confirmation of any sort of tapering, this year or early next year, could see softer prices for the non-interest-bearing commodity in the medium term as the inevitable first rate hike edges closer. However, until then, gold could still trade higher if Friday’s momentum continues into next week resulting in a break above 1830, a level that has served as a significant level of resistance over the last two months. Failure to break above 1830 may favor continued range trading setups. 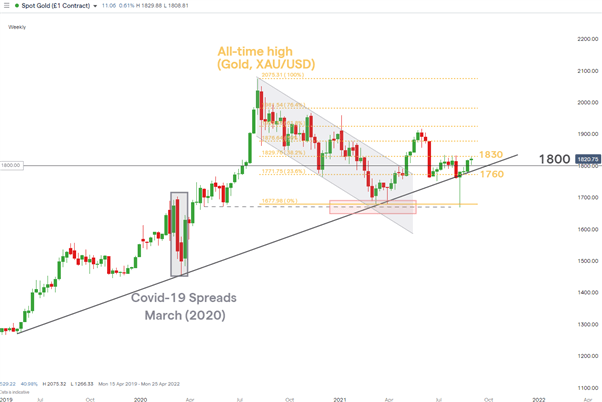 The main driver behind the initial move in the gold price can be attributed to the drop in the dollar via the US Dollar Basket (DXY) which is viewed as the benchmark of dollar performance vs major currency pairs. 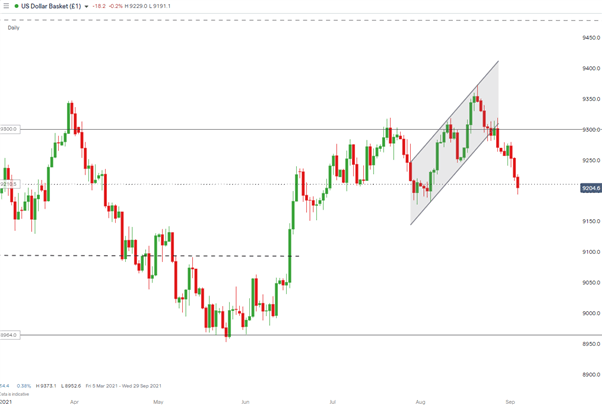 Gold Outlook for the Week Ahead: Bullish

The precious metal could very likely continue the long term uptrend dating back from June 2019 but needs to clear the 1830 mark which would likely be made possible from a continued decline in the dollar.

However, the risk to this outlook remains that should the market anticipate a greater possibility of tapering in the build up to the September 22nd address, this could very well play out via renewed dollar strength which places downward pressure on gold prices where range trading setups should be weighed up.

Additionally, we are heading into festival season in India where there is typically stronger demand for the precious metal which is to be worn as jewelry. While this is unlikely to drastically impact the gold price, it may help support prices where they are and helps support the bullish narrative.