Swiss Franc Forecast: Why CHF May be at Risk Despite Wobbly Stocks, Eyes on SNB

The Swiss Franc has been struggling to capitalize on recent jitters in global stock markets and it may continue to underperform ahead. CHF tends to do well when market volatility is on the rise and vice versa thanks to its anti-risk attributes, particularly when comparing it against other currencies in Europe. So despite some wobbliness in stocks as of late, especially in the tech sector, what might explain its underwhelming performance?

Before diving into that, the Swiss National Bank (SNB) may actually welcome further declines in CHF, particularly with the next monetary policy announcement coming up on March 25th. Switzerland’s export-oriented economy means that a strong local currency can bring with it deflationary forces. The SNB has been struggling to bring up CPI to its 2% price target for years, intervening in forex markets to keep deflation at bay.

As the coronavirus ravaged global financial markets last year, the central bank had to aggressively step up efforts to prevent its anti-risk currency from appreciating too rapidly. It ramped up total sight deposits, a proxy of foreign exchange reserves, to help cool strength in the CHF – see chart below. But since then, the SNB has been letting off the gas pedal, especially given the currency’s recent depreciation.

Check out the DailyFX Economic Calendar for incoming Switzerland data 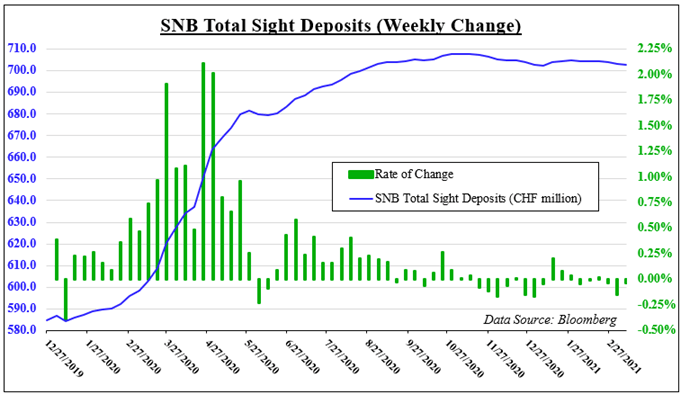 Now the rollout of the coronavirus vaccine around the world and massive fiscal stimulus from the United States are bringing with them prospects of reflation. This can be seen by taking a look at longer-term Treasury rates, with the 10-year up almost 240% from August’s bottom. Rising government bond yields have also been seen in Switzerland, though the entire yield curve (from the front-end to the 50-year rate) still remains negative.

In fact, the SNB holds the title as the central bank with the lowest benchmark lending rate, coming in at -0.75%. Vice President Fritz Zurbruegg noted that the country’s deeply negative policy rate and intervention will continue to be necessary. Despite inflation bets rising in parts of the world and markets starting to price in early stages of tapering from the United States as economic data outperforms, the SNB may stay low in the long run.

You can see these expectations by looking at 10-year bond yield spreads between the United States and Switzerland. On the chart below, the Swiss Franc has been depreciating as returns on fixed income rise externally, making the CHF relatively less appealing versus its major counterparts. Meanwhile, prospects of low rates will likely mean that the Franc continues to remain a dominant funding currency in the carry trade.

Ahead, Chair Jerome Powell is due to testify, alongside Treasury Secretary Janet Yellen, before the Senate Banking Committee this coming week. If asked about bonds, Mr Powell may continue to reiterate similar commentary about them. So while the CHF may be vulnerable from a yield perspective, still it should be noted that risk aversion could slow its depreciation seen as of late. 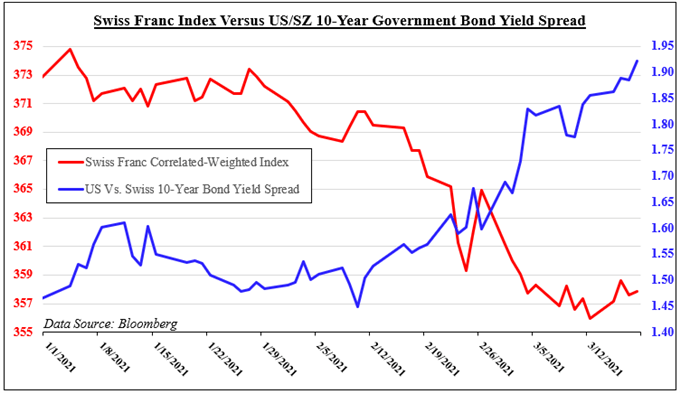