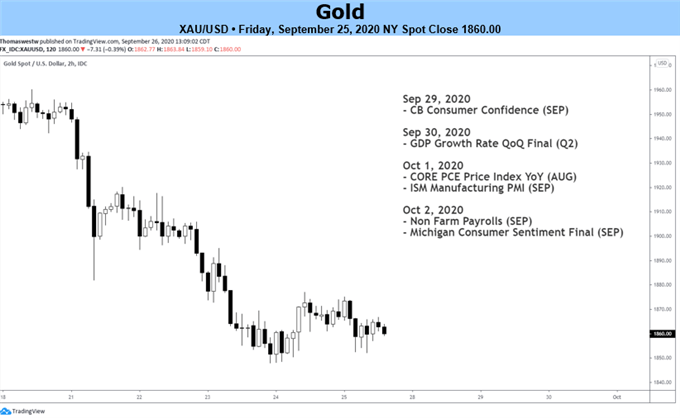 Gold prices fell the most since August last week despite further losses in the S&P 500 on Wall Street. The anti-fiat yellow metal struggled in an environment where the US Dollar was rising, and risk aversion placed a greater premium for liquidity. Treasury yields interestingly held their ground for the most part, especially on the longer-dated maturity spectrum – see chart at the end of the article.

Falling yields would have likely helped cushion the selloff in XAU/USD. What might explain their resilience? One reason might come from some doubt over additional fiscal support, or at the very least its lack of expediency. Fed Chair Jerome Powell stressed at a congressional testimony that more stimulus is needed. This is as the markets were recently left disappointed over the urgency of additional quantitative easing.

As gold bears no interest for holding and is largely priced in USD across the globe, it can be quite sensitive to movements in US government bonds and the Greenback. Further strength in the US Dollar may continue working against its favor, particularly if risk aversion picks up pace in financial markets. At the same time, a flight to safety in the form of buying Treasuries may cushion the downside potential for gold.

With that in mind, all eyes turn to the US House of Representatives this coming week. House Democrats are drafting a $2.4 trillion stimulus proposal that may pass in the chamber. President Donald Trump has entertained backing a larger stimulus deal than previously. It would also need the Senate’s blessing. Debate in the latter over a potential supreme court vacancy leaves less time for bipartisan talks over the package.

All eyes at the end of the week turn to the US non-farm payrolls report. Data out of the world’s largest economy continues to outperform economists’ expectations, but this has been by a narrowing margin since the middle of July. Markets are forward looking, persistent threat over the timeliness of a fiscal package could cast a shadow of doubt over swift economic recovery expectations, undermining another solid NFP report.