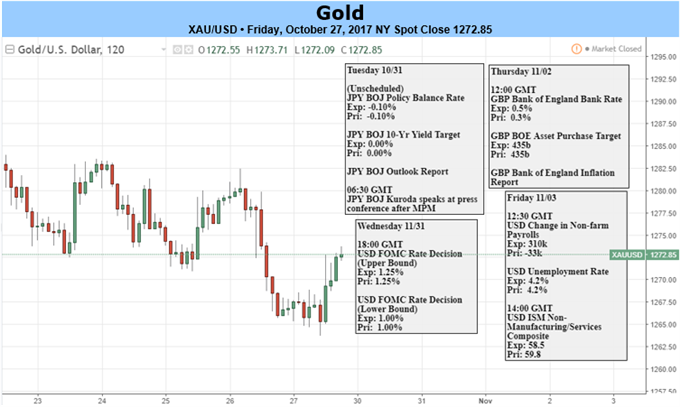 Gold prices are down for the second consecutive week with the precious metal off by .75% to trade at 1270 ahead of the New York close on Friday. The losses come amid continued strength in the U.S. Dollar with the DXY up more than 1.1% this week. Fueling the gains in the greenback was a sharp sell-off in the Euro after a dovish ECB President Mario Draghi suggested that interest rates would likely remain at present levels for "an extended period of time" after the QE program ends.

Heading into next week, all eyes fall on the Fed with the FOMC rate decision slated for Wednesday. While no change to the benchmark rate is expected, traders will be looking for any changes to the accompanying statement- specifically as it pertains to the inflationary outlook. Keep in mind markets have largely priced in a December hike with Fed Fund Futures currently showing an 87.1% probability for an increase of 25bps. However with both 3Q GDP and the Core Personal Consumption Expenditure (PCE) coming in stronger-than-expected on Friday, the question now becomes the future pace of subsequent rate-hikes.

For gold, prices are treading into murky territory and while some downside pressure may still be on the cards near-term, the decline starts to look vulnerable heading into next week. On whole, price have continued to trade within the confines of the monthly opening range and we’ll be looking for next week’s event risk to fuel a break. 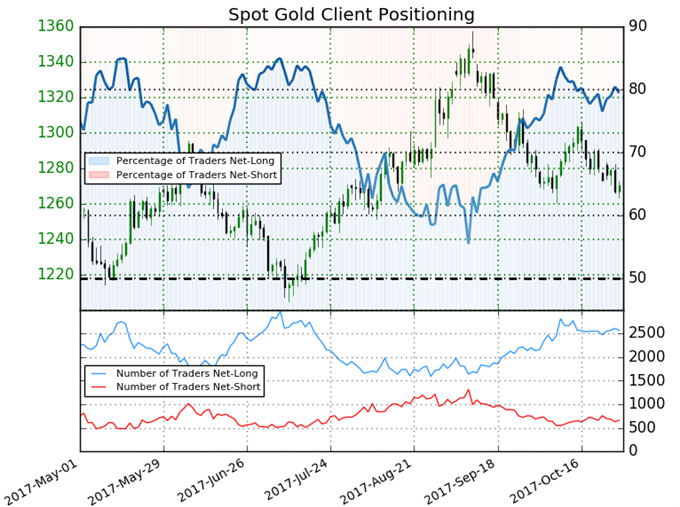 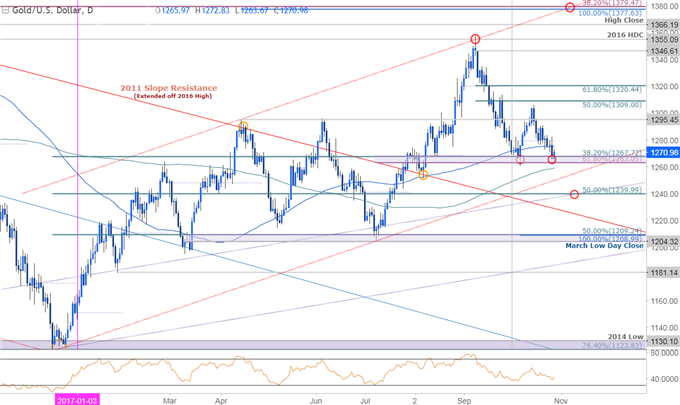 Prices dropped into confluence Fibonacci support again this week at 1263/67. Note that the objective monthly opening range rests just lower and is backed by the 200-day moving average at 1259. A break below this threshold would shift the focus towards confluence support down at 1240. 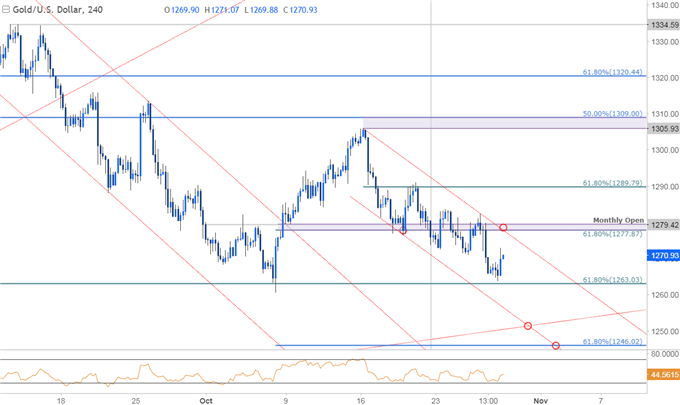 We’ve had to continually adjust this slope and while we can’t rely on it yet too heavily, the upper does once again highlight the 1278/79 zone for near-term resistance. Ultimately a breach above 1290 would be needed to shift the focus back to the long-side targeting a breach above the monthly opening-range high / 50% retracement at 1306/09.

Bottom line: from a trading standpoint I’ll be looking for prices to stabilize above this level to suggest a more significant low is in place. A daily close below would risk a drop into subsequent support targets- such a scenario would have me looking for exhaustion / long-entries on a move into confluence support zones at 1250 & 1246.