Gold Prices Continue to Shine on Dollar Decline- Resistance Ahead 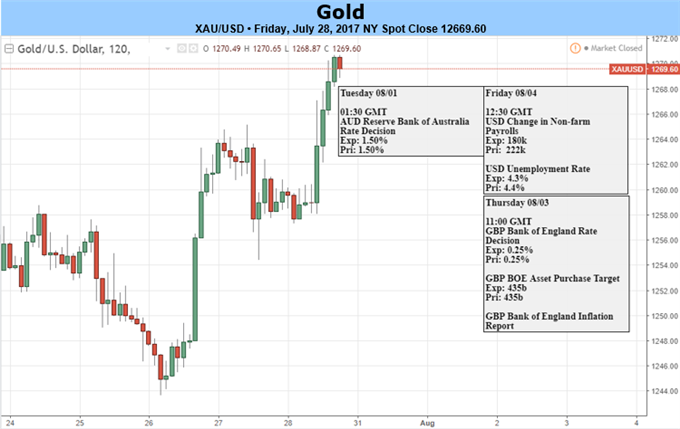 Gold prices rallied for the third consecutive week with the precious metal rallying 1.9% to trade at 1268 ahead of the New York close on Friday. The advance comes alongside continued weakness in the greenback with the DXY trading at the yearly lows. Although our broader outlook on bullion remains unchanged, prices are at risk for a near-term correction as we head into the August open.

U.S. 2Q GDP figures released on Friday showed the economy grew at an annualized pace of 2.6% q/q, slightly missing consensus, with the Core Personal Consumption Expenditure (PCE) topping expectations with a print of 0.9% q/q. The data did little to shift expectations for a December interest rate hike with markets still pricing a roughly 50/50 chance the Fed will hike again this year. News that North Korea has conducted yet another missile test spurred a late-week push higher in gold prices which stretched into near-term resistance just ahead of the European close.

Looking ahead to next week, markets will be closely eyeing central bank interest rate decisions from the Reserve Bank of Australia (RBA) & the Bank of England (BOE) with the highly anticipated U.S. Non-Farm Payroll report slated for Friday. While the broader outlook for bullion remains constructive, prices are eyeing near-term resistance heading into the close of the month and could limit the topside near-term. 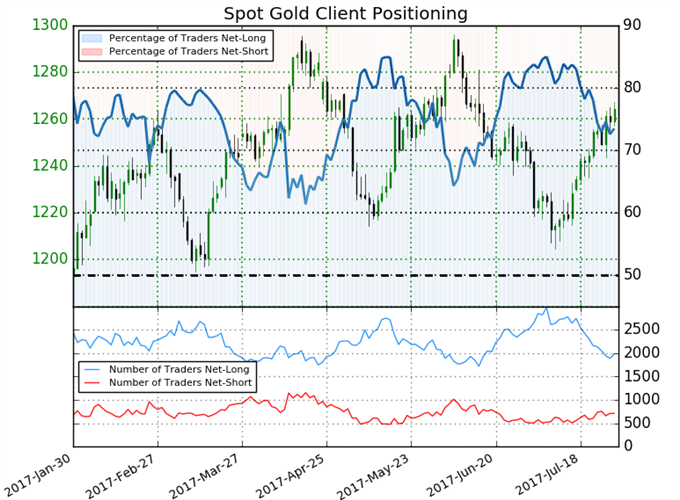 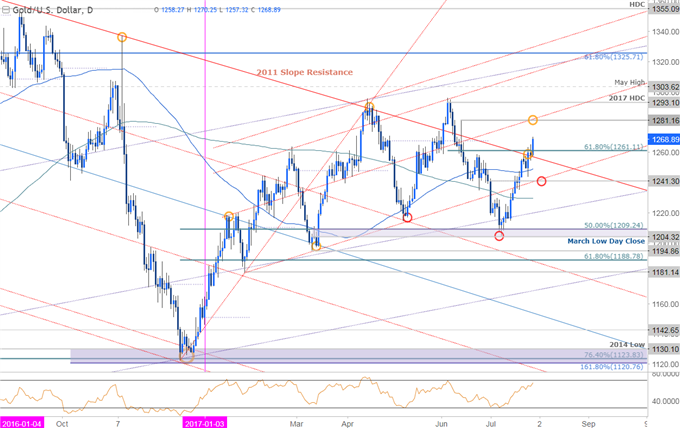 Gold prices broke above confluence resistance this week at 1259/61, putting the , “broader up-trend back in focus targeting a sliding parallel extending off the January highs, currently around 1280s.” Caution is warranted heading into the close of the month with prices eyeing near-term resistance just higher into the open of August trade. Broader bullish invalidation is now raised to 1241. 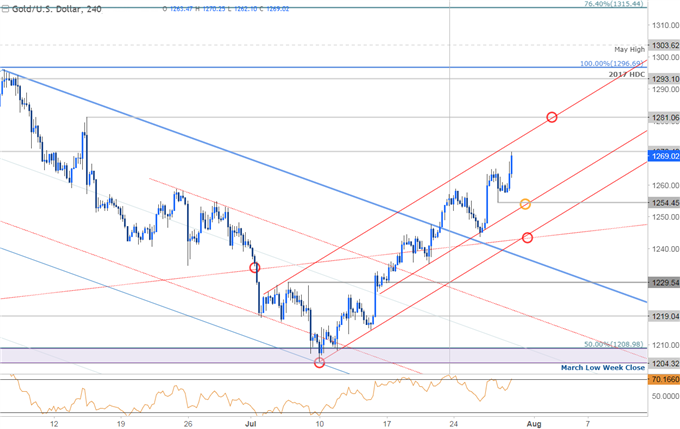 Last week we noted a near-term constructive outlook, “while above 1230. A breach higher targets subsequent resistance objectives at 1270 and 1281.” Gold prices rebounded off a sliding parallel early in the week with the rally taking out the 1270 target on Friday. Note that near-term channel resistance is just higher and a rally into this region could see some profit-taking before continuing higher. Interim support rests at 1254 backed by the weekly low / lower parallel at 1243. Bottom line: could get an interruption next week but the trade remains constructive while within this formation.