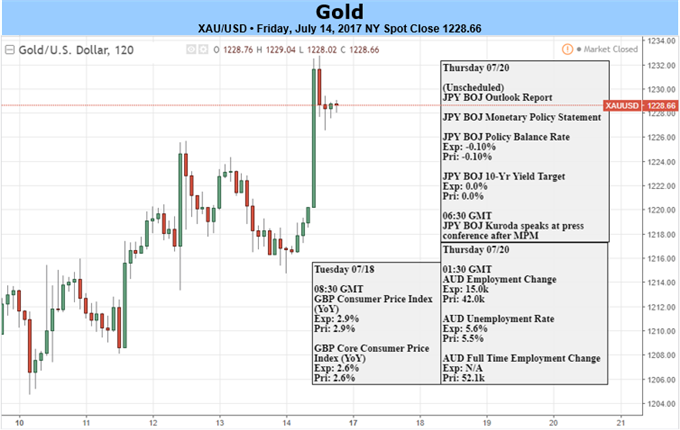 Gold prices rebounded this week with the precious metal rallying 1.33% to trade at 1228 ahead of the New York close on Friday. The advance has been supported by continued weakness in the greenback with the DXY down more than 0.7%.

The June Consumer Price Index (CPI) & Retail Sales figures came in shy of consensus estimates on Friday, fueling another sell-off in the dollar. The data comes on the back of this week’s semi-annual Humphrey Hawkins testimony before congress where Fed Chair Janet Yellen cited a more dovish outlook on monetary policy. The committee judged that “because the neutral rate is currently quite low by historical standards, the federal funds rate would not have to rise all that much further to get to a neutral policy stance.” At the same time, Yellen left the door open for further easing measures should market conditions deteriorate.

The commentary suggests that while the Fed does see the economy gathering pace, Yellen and Co may be concerned that the central bank will lack the ammunition to respond to another crisis given the current policy stance- shifting the focus to the balance sheet off-load. As such, markets have seen a slight re-pricing in expectations for a December hike with Fed Fund Futures now pricing a 39% likelihood for a 25bps increase in the benchmark interest rate. U.S. data is light next week and for gold prices, the focus remains on the sharp reversal seen this week off support. 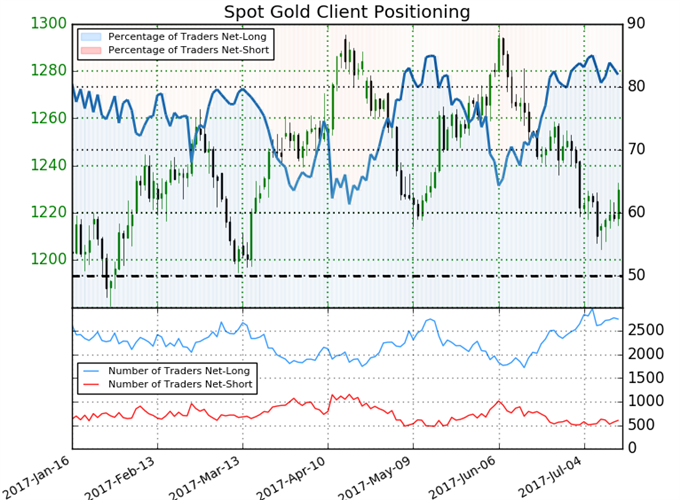 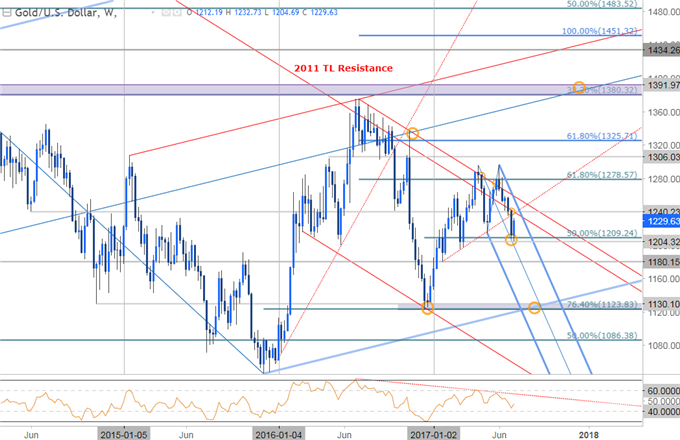 Last week we noted that, “the break below basic trendline support extending off the late-January lows shifts the medium-term focus lower in gold prices with the decline now testing initial support at the confluence of the 50% retracement and the late-February low-day / low-week close at 1204/09.” That support zone held into the start of the week with initial weekly resistance seen around ~1240. A breach above parallel resistance extending off the 2016 highs would be needed to mark resumption of the broader uptrend. 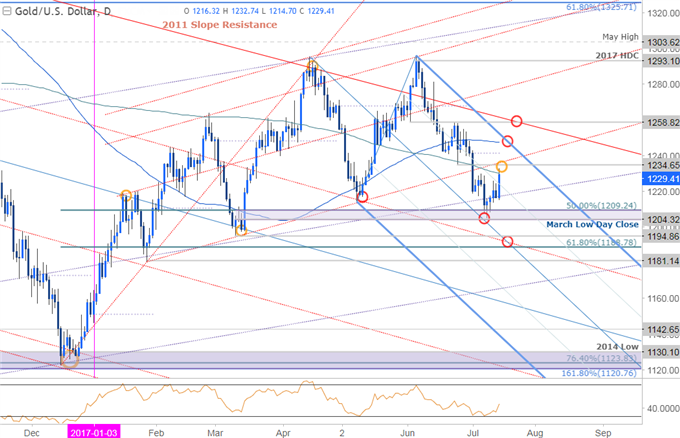 “Daily resistance stands with the 50-line / 200-day moving average / June 26th swing low at 1232/35.” We’re testing that level into the close of the week with a breach here targeting the monthly open (1241) backed by the upper median-line parallel / 100-day moving average at ~1247. Broader bearish invalidation stands at 1258. 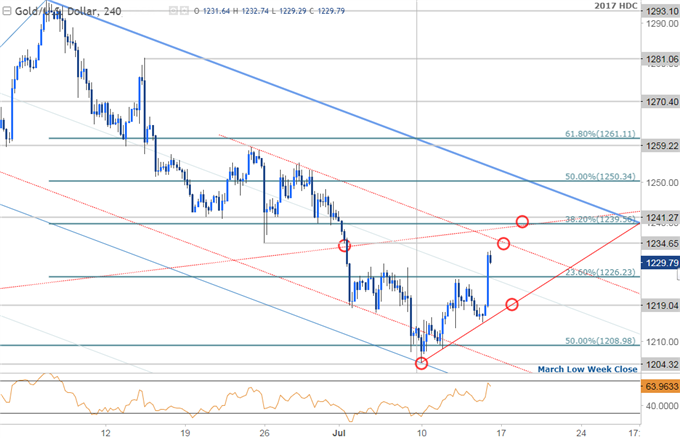 A closer look at price action sees gold continuing to trade within the confines of this descending pitchfork formation with prices rebounding sharply off the median-line early this week. The advance is now approaching parallel resistance / former swing lows into 1235 which is backed closely by more significant resistance at 1240/41 (also the monthly open). Heading into next week the focus remains higher while above 1219. Bottom line: I’ll be looking to fade weakness early next week targeting a rally toward the upper parallels- We’ll have to reassess price action there to determine whether the advance will materialize into a more meaningful reversal in prices.