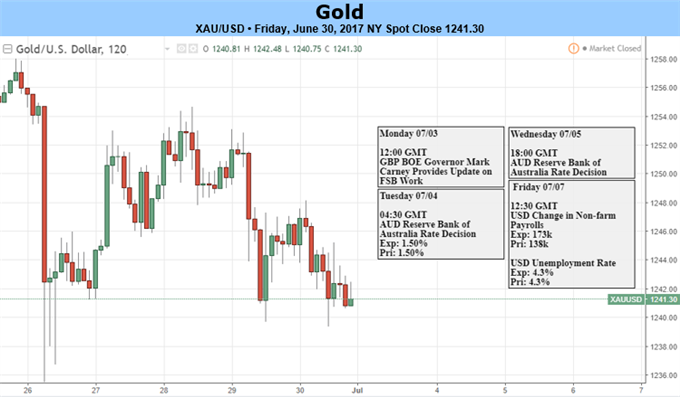 Gold prices were down this week with the precious metal off by 0.98% to trade at 1243 ahead of the New York close on Friday. The losses come alongside weakness in broader equity markets with all three major US indices flat / lower on the week. However, with concerns over a broader shift in the tone of global central bankers and growing doubts regarding the future of fiscal policy, gold is caught between a rock and hard place with the technical outlook also highlighting a near-term consolidation range.

Rhetoric from the FOMC, ECB, BoE & BOC continued to weigh bullion as concerns mounted that global central banks are becoming more inclined to scale back on their accommodative policy stance. The result has fueled a sell-off in bonds (rally in yields), putting pressure on non-yielding assets like gold.

Highlighting the economic docket next week are the U.S. ISM figures, FOMC minutes and the June Non-Farm Payrolls report. With the Fed looking to begin offloading its massive $4.5 trillion balance sheet, U.S. data will need to continue to perform – as it stands markets are pricing just a 54% chance the central bank will hike in December. For gold, the outlook heading into the monthly open remains precarious with the decline now approaching broader up-trend support as sentiment begins to level off. 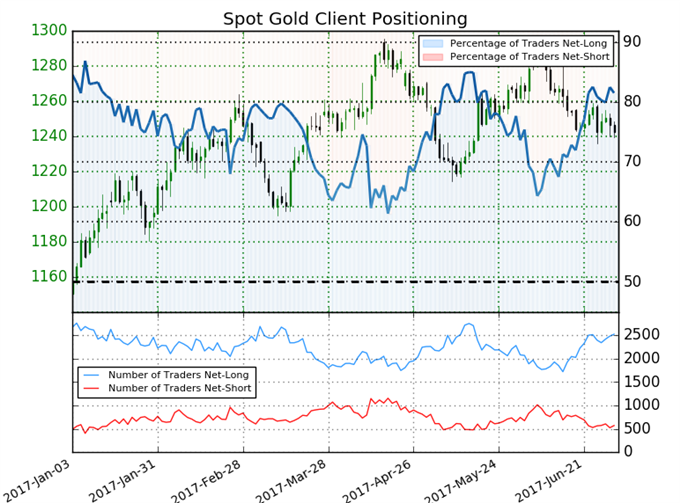 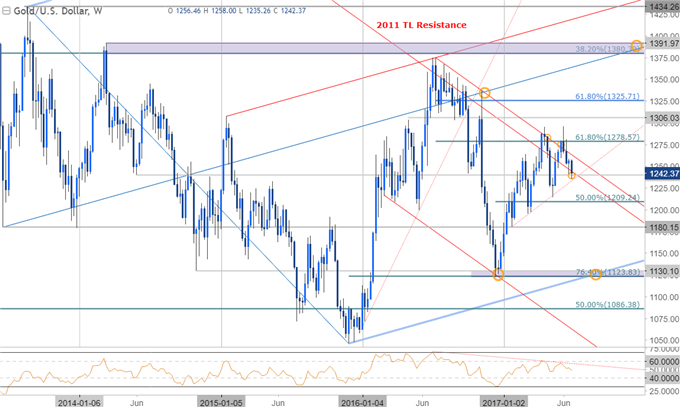 Earlier this month we noted that, “Gold prices have were unable to make a weekly close above key resistance at 1278 yet again this month, with the pullback now eyeing weekly support 1242 -backed closely by a basic trendline extending off the late-January low.” We are testing that support region now. 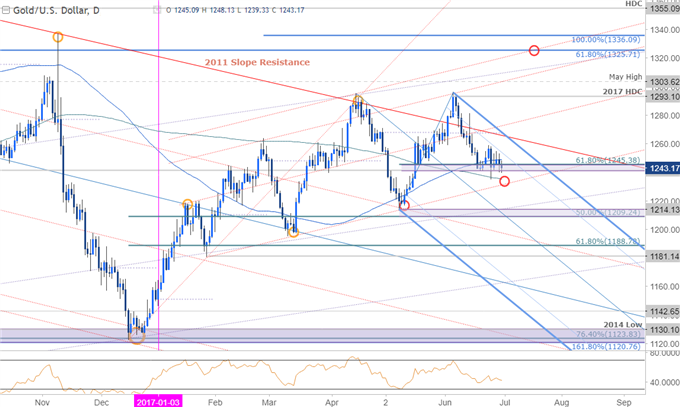 Gold prices look to close the week at the 1241/45 support zone we’ve been tracking for the past few weeks. Note that this threshold is backed closely by the 200-day moving average and basic channel support extending off the late January low ~1230/33-an area of interest for exhaustion low / long-entries and broader bullish invalidation. 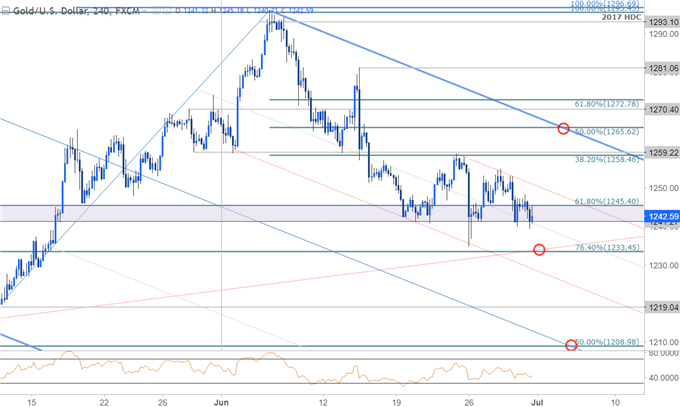 A closer look at price action sees gold continuing to trade within the confines of this descending pitchfork formation with prices holding just below a sliding parallel extending off the June 23rd high. The focus heading into the start of July trade is on channel support which converges on the 76.4% retracement at 1230/33.The immediate short-bias is at risk heading into this threshold.

A breach above near-term slope resistance shifts the focus back towards 1259 with key resistance / bearish invalidation steady at 1265- A close above this level would be needed to suggest a more significant low is in place. Bottom line: heading into the monthly open we’ll be on the lookout for a near-term low with a breach of this formation to needed to shift the broader focus higher. A close below 1230 would dramatically change the outlook for gold heading into the Q3.